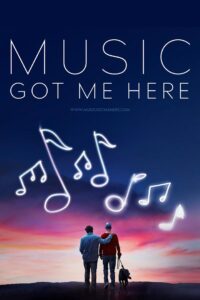 GOT ME HERE. The film follows the against-all-odds, true-life journey of Forrest Allen – a story of the power of music to heal and transform lives, often in miraculous ways. A snowboard accident leaves Forrest Allen, age 18, trapped inside himself, unable to speak or walk for almost two years. Tom Sweitzer, an eccentric music therapist with a troubled childhood who credits music with saving

his own life, is determined to help Forrest find his voice. He dresses up in costumes and makes up silly songs.  For months, Forrest doesn’t even acknowledge him. Then, one day Forrest painstakingly types with one finger on his Dynavox: “Please help me find my voice”. Tom begins by teaching Forrest to breathe…then hum. After many months of painstaking practice, the hums turn into Forrest’s

first two words. Director and writer Susan Koch joins us to talk about her uplifting tale of overcoming hardship, physical, spiritual and psychological as well as underscoring the pre-cognitive connective that humans share and with it our brains can be rewired to overcome trauma.

For news, screenings and updates go to: musicgotmehere.com

Winner of the Best Social Impact Award at the Greenwich International Film Festival,MUSIC GOT ME HERE was filmed over the course of five years and features interviews with renowned soprano and music therapy advocate Renee Fleming and National Institutes of Health Director Dr. Francis Collins. MUSIC GOT ME HERE, is currently screening at Laemmle Virtual Cinema.

About the Director – Emmy and Peabody award-winning filmmaker Susan Koch’s films and non-fiction television shows have appeared on ABC, NBC, PBS, HBO, Showtime, MTV, ESPN, The Discovery Channel, National Geographic, CNN, and American Movie Classics. Koch’s documentary Kicking It, about homeless soccer players who compete in an international tournament, premiered at the Sundance and Tribeca Film Festivals and was broadcast on ESPN. Koch’s other films include the award-winning documentaries Reel Models:  First Women of Film (AMC), Mario’s Story (Showtime), City at Peace (HBO) and The Other City (Showtime). Koch is the Executive Director of the Middleburg Film Festival, located in Middleburg, Virginia, outside Washington, D.C.