MY DARLING VIVIAN is the the story of Vivian Liberto, Johnny Cash’s first wife and 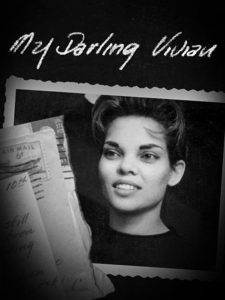 the mother of his four daughters. In 1951, Catholic schoolgirl Vivian Liberto meets handsome Air Force cadet Johnny Cash at her local San Antonio, Texas skating rink. Their whirlwind summer romance lays the foundation for a feverish three-year-long correspondence while Johnny is stationed in Germany. Thousands of letters later, the two marry upon his return in 1954. Within a year, a career blossoms and a family is started. By 1961, Johnny Cash is a household name, number one on the music charts, and perpetually on tour. Meanwhile, only two weeks postpartum, Vivian settles into their

custom-built home in Casitas Springs, California with their four young daughters. Plagued by bobcats, rattlesnakes, all-hours visits from fans, and a growing resentment toward her husband’s absence, Vivian is pushed to a

near breaking point when she and her daughters are targeted by hate groups over her perceived race. In MY DARLING VIVIAN, we meet the first Mrs. Cash as her daughters, Rosanne, Kathy, Cindy, and Tara, share with us first hand, for the first time, the entire story of love, isolation, fear, heartbreak, and survival. Director Matt Riddlehoover and Producer Dustin Tittle joins us to talk about an unacknowledged, but crucial part of the Cash legacy and the impact it has on the lives of those who loved him.

For news, screenings and updates go to: mydarlingvivian.com

DIRECTOR’S STATEMENT – Vivian Liberto’s story is one that has intrigued me for years. Dustin, my husband and producing partner, is the grandson of Vivian and Johnny Cash; I’d heard fragments of her experience from my mother-in-law, Kathy, and how grossly misrepresented she was in the 2005 film, Walk the Line. It wasn’t until a close friend suggested we make this film that I even considered it a possibility – it seemed too huge a responsibility.  Now that Vivian’s truth is being told at a time when our society is beginning to listen to its aggrieved women, maybe her joy and pain and reality can be fully accepted. Her life was romantic and bewildering, difficult and significant, and wholly filmic – more than a mere footnote in the biography of Johnny Cash. The marks that were left on our four interviewees as children are undeniable, and also worth noting. These women have held an important piece of hidden history that seems more relevant today than ever before. It’s time we sat down and spent an hour or so in their, and their mother’s, shoes. Over these past two and a half years, I’ve fallen madly in love with Vivian, and my hope is that others do, too.  – Matt Riddlehoover, Director

whose whole life was glossed over in favor of a more camera-ready tabloid romance. There is great value to be found in My Darling Vivian if you’re up to walk this line.” – Bradley Gibson, Film Threat

“My Darling Vivian is an unmistakably loving and sensitive portrait, an imperfect but impassioned attempt to makes the case that the easy Johnny Cash narrative is missing an important figure.” – Steve Pond, TheWrap