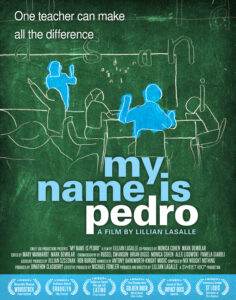 South Bronx Latino maverick educator, Pedro Santana, and what he, in turn, meant to public education. MY NAME IS PEDRO is a profound story of how one person actualizes learning and positive change in children, adults, environments and communities through an ‘impact’ ripple effect strategy that he has effortlessly perfected. MY NAME IS PEDRO is also an essential and timely reminder of the importance of great educators that exist within the infrastructure of our country’s public education system. Infectious in his optimism, Santana becomes one of the most influential public-school teachers and then administrators in the New York public school system after turning his troubled Bronx middle school, MS 391, around. He is unapologetic in

his commitment to create change for kids, no matter the odds. When a glowing front-page New York Times article catapults him into the spotlight, he is recruited and then accepts a promotion to use his famed ‘out of the box’ and transformative practices to save a corrupt and divided suburban school district. But the political challenges there may simply be too great, even for the infallible Santana. Director Lillian LaSalle joins us to talk about her beautifully rendered story of a man determined to guide and motivate young people to be better students and better people.

For news, screenings and updates go to: mynameispedro.com

Find out where to watch: mynameispedro.com/screenings