In the 1943, Fayard and Harold Nicholas were featured in the film Stormy 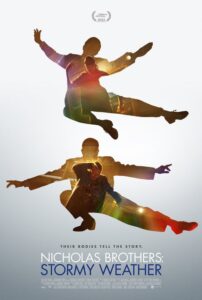 Weather. The film was a showcase for a cast of Black artist, virtually unseen in mainstream American theatres. Remarkably the Nicholas Brothers dance routine from that film prefigured modern day hip hop by more than three decades. Dance legend and Tony Award winning choreographer Savion Glover  and others guide us along their professional path and assess their legacy, while contemporary dancers

Les Twins choreograph and perform their homage to the original. Co-directors and producers Michael Shevloff, Paul Crowder join us for a conversation about the careers of two poverty stricken,  African-American brothers who were arguably the greatest dancing duo in the history of cinema, performing a legendary dance number and how that became the inspiration for two modern day dance icons, Les Twins and their own determination to see it come to life in their documentary short film.

About the filmmaker – Michael Shevloff’s career began in England working on films including Empire of the Sun and Full Metal Jacket before serving as showrunner on TV series such as Expedition: Africa and Top Gear USA. Shevloff’s recent documentary credits include 1: Life On The Limit, Bobcats on Three as producer, and his directorial debut, Mosley: It’s Complicated. Michael is currently producing various projects at Flat-Out Films, including Tolstoy The Tomato Thief, the story of a crop raiding elephant, and The Hags, about the first all-girl skate gang in LA in the 1980’s. For more go to: flatoutfilms.com

About the filmmaker Paul Crowder is an award winning editor, director and musician who’s film career began with the seminal skateboarding documentary, DogTown & Z-Boys. As an editor, Crowder’s long list of credits includes Riding Giants, The Beatles: Eight Days a Week and Pavarotti. His directing credits include UFO,  Amazing Journey: The Story of The Who, 1: Life on the Limit and Last Play at Shea. Crowder is currently directing Blue Angels, an IMAX documentary feature film being produced by JJ Abrams, and will team up again with Ron Howard to edit the upcoming documentary of the life of Jim Henson. For more go to: flatoutfilms.com

About the subjects – The Nicholas Brothers were an entertainment act composed of biological brothers, Fayard (1914–2006) and Harold (1921–2000), who excelled in a variety of dance techniques, primarily between the 1930s and 1950s. The Nicholas Brothers grew up in Philadelphia, the sons of college-educated musicians who played in their own band at the Standard Theater. At the age of three, Fayard would always sit in the front row while his parents worked, and by the time he was ten, he had seen most of the great African-American  vaudeville acts—particularly the dancers, including such notables of the time as Alice Whitman, Willie Bryant, and Bill Robinson. The brothers were fascinated by the combination of tap dancing and acrobatics. Fayard often imitated their acrobatics and clowning for the kids in his neighborhood. Best known for their unique interpretation of a highly acrobatic technique known as “flash dancing“, they were also considered by many to be the greatest tap dancers of their day, if not all time. Their virtuoso performance in the musical number “Jumpin’ Jive” (with Cab Calloway and his orchestra) featured in the 1943 movie Stormy Weather has been praised as one of the greatest dance routines ever captured on film. Growing up surrounded by vaudeville acts as children, they became stars of the jazz circuit during the Harlem Renaissance  and performed on stage, film, and television well into the 1990s. Diminutive in size, their artistry, innovation, and soaring leaps have never been surpassed.