In the documentary film No Ordinary Man The legacy of Billy Tipton, a 20th-century 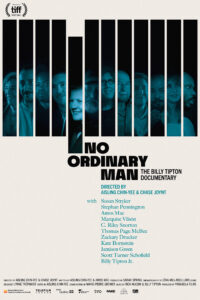 American jazz musician and trans icon, is brought to life by a diverse group of contemporary trans artists. Revered jazz musician Billy Tipton — born Dorothy Lucille Tipton — gained fame throughout the United States in the 1940s and ’50s. His trans identity was not known throughout the echelons of the jazz and pop worlds, and it wasn’t revealed publicly until after his death in 1989. For decades, Tipton was portrayed as an ambitious woman “passing” as a man in pursuit of a music career at a time when

the industry was dominated by men and trans representation was virtually non-existent. Since then, he has become a foundational icon of trans-masculinity. Co-directors Aisling Chin-Yee and Chase Joynt’s examine the disgraceful media scrutiny and

questions of legitimacy his family endured after his death. This thoughtful, timely documentary embraces the challenge of bringing Tipton’s words to life, reimagining his narrative through a diverse group of contemporary trans performers as they collectively paint a portrait of an unlikely hero. NO ORDINARY MAN explores the life and legacy of American jazz musician and trans icon Billy Tipton as told through the eyes of today’s leading voices in the trans community. NO ORDINARY MAN features Marquise Vilsón, Scott Turner Schofield, Susan Stryker, C. Riley Snorton, and Thomas Page McBee, among others. Co-director Chase Joynt (Aisling Chin-Yee) and Writer Amos Mac join us to talk about the life and the times of an artist, husband and father hiding in plain sight and how Billy Tipton’s story informs and imbues today’s trans community.

For news, screenings and updates go to: chasejoynt.com/no-ordinary-man

About the filmmaker – (Co-director) Chase Joynt is a transgender moving-image artist and writer whose films have won jury and audience awards internationally. His latest short film, Framing Agnes, premiered at the 2019 Tribeca Film Festival, won the Audience Award at Outfest in Los Angeles, and is being developed into a feature film with support from Telefilm Canada’s Talent to Watch program. Awarded the EP Canada/Canada Film Capital Award for Emerging Canadian Artist, Joynt’s first book You Only Live Twice (co-authored with Mike Hoolboom) was a 2017 Lambda Literary Award Finalist and named one of the best books of the year by The Globe and Mail and CBC.

About the filmmaker – (Writer) Amos Mac is an out transgender writer staffed on the upcoming drama series Gossip Girl (HBO Max, 2021). Previously he’s worked on shows including Amazon’s Transparent and VICELAND’s Gaycation. From 2009-2019, Amos was a founding editor of Original Plumbing; the first print magazine in America dedicated to trans male culture. Informational and humorous, OP provided ten years of artful documentation of trans masculine community. The official book, Original Plumbing: The Best of Ten Years of Trans Male Culture, was released in 2019 by the Feminist Press.

About the filmmaker – (Co-director) Aisling Chin-Yee is a cisgender, award-winning producer, writer, and director based in Montreal, Canada. Aisling was named one of Canada’s Rising Film Stars by Now Magazine 2019. Her feature film directorial debut, The Rest of Us, starring Heather Graham (Boogie Nights, The Hangover), and Sophie Nélisse (The Book Thief) premiered at the Toronto International Film Festival 2019. Aisling also produced the award winning feature films, Rhymes for Young Ghouls, Last Woman Standing , and The Saver among others. In 2017, she co-founded the #AfterMeToo movement alongside Mia Kirshner and Freya Ravensbergen. In 2018 she was selected in the inaugural cohort of professionals in the 50 Women Can Change the World in Media and Entertainment in Hollywood. In 2019, Aisling received the TIFF Canning Fellowship.

“The film contains interviews with a number of trans artists who find Tipton especially meaningful in their lives; the moment when Tipton’s son discovers that his father is important to many people is worth the price of admission.” – Alissa Wilkinson, Vox

“Tender, topical and well-crafted, No Ordinary Man is no ordinary film.” – Brad Wheeler, Globe and Mail

“No Ordinary Man isn’t so much a documentary of musician Billy Tipton but a major contribution to the history of trans-masculinity.” – Danielle Solzman, Solzy at the Movies

“It’s moving and empowering, a reminder of how far we’ve come and how far we have to go.” – Brian Tallerico, RogerEbert.com