A rising star in progressive politics and a new father, 32-year-old Ady 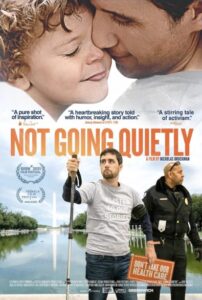 Barkan’s life is upended when he is diagnosed with ALS. But after a confrontation with powerful Senator Jeff Flake on an airplane goes viral, catapulting him to national fame, Ady and a motley crew of activists ignite a once-in-a-generation political movement called “Be a Hero.” Together, they barnstorm across the country and empower people to confront their elected officials with emotional, personal stories to demand healthcare justice and Ady holds groundbreaking interviews with Joe

Biden, Kamala Harris, Bernie Sanders and Elizabeth Warren.  Through his journey, Ady discovers that collective action and speaking truth to power offers hope for his family and millions of others. Continuing today to motivate others to use the time they are given and speak truth to power, Barkan continues to fight for a more just world for his son to inherit. He was featured as one of TIME’s top 100 Most

influential people of 2020 and has most recently been credited with pressuring President Biden to make the recent decision to waive the COVID-19 vaccine patent. Barkan is referred to as “The Most Powerful Activist in America,” because when he speaks, people listen.Director Nicholas Bruckman joins us for a conversation on the physically, emotionally and logistically demanding experience it was documenting Barkan’s life and work as well as the insider’s perspective on the power of grassroots political organizing he and his team are able to capture.

For news and updates go to: notgoingquietlyfilm.com

In the Los Angeles area: laemmle.com/film/not-going-quietly

In NYC go to: angelikafilmcenter.com/nyc/film/not-going-quietly

Director’s Statement – As a creator of both independent films and branded videos for progressive candidates and causes, my work straddles the intersections between journalism and activism, storytelling and propaganda, art and action. I first met Ady in the role of a commercial director, when I was connected to him to direct a short launch film for the newly-formed Be a Hero campaign. I flew to Santa Barbara for what I expected to be a somber shoot: an ailing father pleading with politicians to protect his health care. But immediately upon interviewing him, I realized that what he was doing was much more profound: reframing the tragic narrative of his disease into a political platform. With self-awareness and strategic planning, he was crafting the story of his illness into a movement that catalyzed other people into action and empowered them to follow his footsteps in confronting politicians with their own stories as a rallying cry.  Ady and I are around the same age with similar backgrounds: activists from secular Jewish families on New York’s Upper West Side. I knew that Ady’s diagnosis could have just as easily happened to me, but that Ady—with astonishing resilience—was turning this otherwise meaningless tragedy into something incredibly powerful and transformative for the country. How would I answer being dealt such a hand? The film is my attempt at answering that question. As Ady loses his privilege, and fights for social change as a marginalized person with a disability, he taught me there are no excuses for inaction, a lesson I first learned from my blind grandfather who championed the rights of the disabled in India. Because I do not identify as having a disability, we consulted with activists/academics and filmmakers from the disability community to ensure that the representation in the film was authentic and inclusive. I hope that those communities, and all of the activists using their stories as a weapon to fight for a better world, feel seen in Ady’s story on screen. – Nicholas Bruckman

About the filmmaker – Nicholas Bruckman, Filmmaker, Director produced the narrative feature Valley of Saints, which won the Sundance Film Festival Audience Award and was nominated for an Independent Spirit Award. He previously directed the feature documentary La Americana, which won numerous festival awards and broadcast worldwide on Nat Geo and PBS. Nicholas is the founder of People’s Television, a NY-based film and commercial production company. Through People’s TV, he directs branded content for clients including Facebook, Airbnb, and Greenpeace.

About the filmmaker – Amanda Roddy Filmmaker, Producer is an award-winning documentary filmmaker with People’s Television, where she has led projects as a director, producer, and writer for high profile clients such as the Democratic National Convention, Elizabeth Warren’s presidential Campaign, Equal Justice Works, The Nature Conservancy, and The Equity Fund. Recently, she directed and produced a two-minute primetime television spot that appeared during the 2020 Democratic National Convention. Her work has been supported by the International Documentary Association, Rooftop Films, Film Independent, IFP, and HBO.

A shot of pure inspiration…Not Going Quietly has a special power”  –RogerEbert.com

“While it profiles a man of extraordinary will, the film is moving because it shows him putting his own considerable achievements within reach for others so long as they’re willing to engage.” – Stephen Saito, Moveable Fest

“A heartbreaking story with humor, insight and action will resonate with anyone” – Jimmy Kimmel

“Heartbreaking, infuriating, and vital, this is a trenchant examination of what ALS sufferers go through daily, and makes a shattering argument that no society with America’s barbaric healthcare system can be truly free or democratic.” – Shaun Munro, Flickering Myth