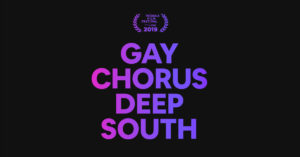 to a wave of discriminatory anti-LGBTQ laws in Southern states and the divisive 2016 election. The San Francisco Gay Men’s Chorus embarks on a tour of the American Deep South. Led by Gay Chorus conductor Dr. Tim Seelig and joined by The Oakland Interfaith Gospel Choir, the tour brings a message of music, love, and acceptance to communities and individuals confronting intolerance. Over 300 singers travelled from Mississippi to Tennessee through the

Carolinas and over the bridge in Selma. They  performed in churches, community centers, and concert halls in hopes of uniting us in a time of difference. The journey also challenges Tim and other Chorus members who fled the South to confront their own fears, pain, and prejudices on a journey towards reconciliation. The conversations and connections that emerge offer a glimpse of a less divided America, where the things that divide us – faith, politics, sexual identity – are set aside by the soaring power of music and humanity. Director David Charles Rodrigues joins us to talk about the expectations and realities that comes with traveling to communities with the hope of changing hearts and minds.

For news, screenings and updates go to: gaychorusdeepsouth.com

“Successfully harnessing the power of both music and message, documentary Gay Chorus Deep South draws its strength not only from its subject, but also the effective way in which it it presents its arguments.” – Nikki Baughan, Screen International

“What makes the film especially compelling, though, are the all-too-human narratives involving those who were at one time badly victimized because of their sexual orientation; they want to forgive, but may never be able to.” – Phil Guie, Film-Forward.com

“There’s a lesson here that applies to more than just LGBT political causes: To heal the country and move on, we must reach across the divide and listen to one another.” – Peter Debruge, Variety

“With good folks like this, from both sides of the aisle, there is hope for humanity yet.” – Christopher Llewellyn Reed, Hammer to Nail