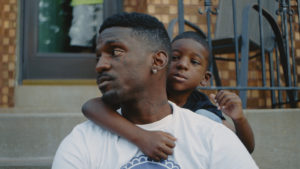 state representative from St. Louis, Missouri. Known as Superman to his constituents, he is a political figure the likes of which you’ve never seen – full of contradictions and deep insights, who has overcome unspeakable loss to become one of the most exciting and unapologetic young leaders in the country. This short verité documentary follows Bruce at a critical juncture in his life, when he is forced to deal with the mental trauma he’s been carrying for the nearly 30 years since his 9-year-old brother was shot and killed in front of him, in order to find peace and truly fulfill his destiny as a leader for his community.  Co-

director Smriti Mundhra  (Sami Khan) join us to talk about how a dynamic and charismatic man from a traumatized community took tragedy and turned into action.

About the filmmakers: Smriti Mundhra’s A SUITABLE GIRL  premiered at Tribeca in 2017 and won the Albert Maysles Award for Best New Documentary Director. KHOYA, Sami Khan’s feature debut, was selected for the Tribeca Film Institute’s Tribeca All Access® fellowship.