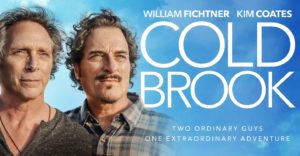 York. They are best friends who work the night shift as museum guards and handymen. Their lives are simple and mostly satisfying, until they are confronted with a supernatural situation. The men are then faced with a dilemma that puts their jobs, marriages, and their futures on the line. COLD BROOK is the directorial debut of William Fichtner (Armageddon, Black Hawk Down, Mom), who co-wrote the film

For news, screenings and updates go to: vert-ent.com

“Cold Brook is an adult fairy tale that embraces its broad interpretations to remind its leading men about what truly matters most.” – Jared Mobarak, The Film Stage

“… Cold Brook succeeds in part by its fantastic cast, but mostly by its focus on simplicity. There’re no grand fights or superfluous moments, just a tale of love that transcends time and mortal existence.” – Douglas Davidson, Elements of Madness

“Are You Ready To Be Different: Part ghost tale, part Bartleby while at the same time a captivating slavery reparations fable, the film flirts with the supernatural even with its heart planted firmly in sobering class and race issues historically and now.” – Prairie Miller, WBAI Radio