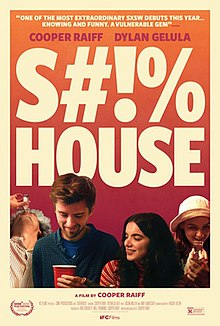 college freshman Alex (Cooper Raiff) during his first year at college and first time away from home. Alex has closed himself off from his classmates, who all appear to have this whole “college thing” figured out. Among thousands of kids trying their best to make college work, He feels alone and depressed. Home is 1500 miles away and he’s struggling to find a reason not to go back. Maggie (Dylan Gelula, First Girl I Loved), Alex’s sophomore RA, has been crushing college since day one. Today though, Maggie is dealt an unexpected loss. After a party at Shithouse,

Maggie wants some company and finds it in Alex. Two young people raised in very different households, Alex and Maggie challenge each other and grow up together. Desperately clinging to his social breakthrough, Alex pulls out all the stops with one more night at Shithouse, hoping to rekindle that moment of connection. Director / Producer / Writer / Editor / Actor Cooper Raiff joins us to talk about the challenge of making his debut feature film, SHITHOUSE, while taking on a multitude of roles and winning the 2020 SXSW Grand Jury Prize for his first film.

For news, updates and screenings go to: shithousemovie.com

“One of the most extraordinary debuts on the list of SXSW selections for this year” – Richard Whittaker, The Austin Chronicle

“Whenever “Shithouse” starts drifting towards a more generic energy, or gets the tiniest bit too plotty for its own good down the home stretch, Gelula is there to bring things back on course.” – David Ehrlich, Indiewire

“Cooper Raiff is breakthrough filmmaker and actor to watch and these are immensely fascinating characters in all of their anxiety, naivety, vulnerability, pain, and palpable growth as human beings” – Robert Kojder, Flickering Myth