Making Waves: The Art of Cinematic Sound reveals the hidden power of sound in 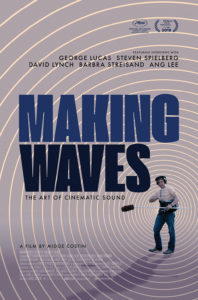 cinema . . . and our lives. Few have “ears to hear” or comprehend the emotional storytelling impact sound plays in so-called visual media. Francis Ford Coppola and George Lucas have both declared  “sound is 50% of the movie,” with Steven Spielberg noting, “Our ears lead our eyes to where the story lives.” Through film clips, interviews and archival footage–an enlightening and nostalgic look at many of Hollywood’s biggest box office hits–the film captures the history, impact and unique creative process of this overlooked art form and the artists behind it. Filled with insights from legendary directors–including George Lucas, Steven Spielberg, Barbra Streisand, Robert Redford, David Lynch, Ang Lee, Sofia Coppola and Ryan Coogler, among others–who share revealing stories about the award-winning work their sound collaborators help to create. In Making Waves, we witness the wild creativity of some

of the industry’s most-respected key sound designers–including Oscar winners Walter Murch (Apocalypse Now), Ben Burtt (Star Wars), Gary Rydstrom (Saving Private Ryan) and Lora Hirschberg (Inception); and Oscar-nominees Cece Hall (Top Gun), Anna Behlmer (Braveheart) and Bobbi Banks (Selma)–who, in pursuing their art and desire to push the medium, are the very people who will go down in the history of cinema as developing sound into the immersive storytelling force it is today. Audiences will discover many unsung collaborators for the key creative artists they are, in a domain that has for too long been characterized as “technical.” Director Midge Costin joins us to evangelize on the power and glory of sound and the visionaries who have pioneered a new frontier in cinema.

For news, screenings and updates go to: MakingWavesMovie.com

“Accessible, illuminating and entertaining, it’s a documentary of huge value, something that will enhance not just your understanding but your future experience of film.” – Emma Simmonds, The List

“A practically perfect primer for anyone interested in the history and craft of filmmaking, answering most of the pertinent, baseline questions while leaving plenty of room for supplemental research.” – William Bibbiani, TheWrap

“Provides an exhaustive history of the medium right before our ears and eyes, jumping quickly from decade to decade and bringing it all together as a comprehensive cinematic dissertation of aural complexity.” – John Fink, The Film Stage

“Making Waves will likely inspire viewers to seek out their favorite films and experience them with fresh ears.” – John DeFore, Hollywood Reporter