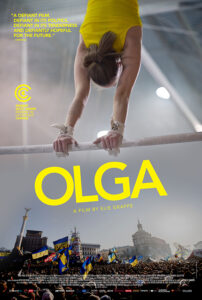 Switzerland, dreaming of Olympic gold and trying to fit in with her new team in her new  home. As she prepares for the European Championships, the Ukrainian people back home in Kyiv rise up in what has become known as the Maidan Revolution, suddenly involving everyone she cares  about. Olga is left a powerless, distant bystander as her mother, an investigative journalist, faces danger as she challenges the brutal Yanukovich regime. Incorporating documentary footage from the 2013 uprising, Olga is

a tense, sensitively handled tale of exile reflecting the clash between the personal and the political in a  young woman’s search for identity. Director and co-screenwriter Elie Grappe joins us for a conversation on his prescient and

humanizing story about Ukrainian / Russian recent history that has a direct bearing on the brutal invasion by Russia now taking place, seamlessly weaving in documentary footage and the fierce portrayal of Olga by newcomer Anastasia Budiashkina.

For updates and screenings go to kinomarquee.com/Olga

About the filmmaker – Born 1994 in France. Elie Grappe completed musical training at the National Conservatory in Lyon. After attending the preparatory course at École Cantonale d’Art de Lausanne (ECAL) he proceeded to study film, receiving his Bachelor in film from ECAL in 2015. His short documentary film REHEARSAL (2014) was selected for IDFA, Clermont-Ferrand and Krakow Film Festivals. His short fiction film SUSPENDU (2015) was shown at 60 film festivals worldwide and garnered numerous awards. OLGA (2021), his first feature- length fiction film, was selected for the 60th Semaine de la Critique at the Cannes Film Festival, where it won the Prix SACD for Best Screenplay. OLGA is Switzerland’s official submission for International Feature Film competition for the 94th Academy Awards®. Elie Grappe lives and works in Switzerland.

“Grappe paints indelible images of physically powerful, mentally vulnerable young women who want to step up to the podium at all costs… Budiashkina is a terrific presence, and the film is in thrall to her powers.”  – Fionnuala Halligan, SCREEN INTERNATIONAL

“Could be appropriately paired with Lauren Hadaway’s “The Novice” or Charlène Favier’s “Slalom”; all three are tough indie films about the dark side of women’s sports, athletes pushing their bodies in an attempt to exercise, or exorcise, something bigger.” – Katie Walsh, TheWrap

“This is a film whose ideas and emotions have come into a fierce new focus… in its unexpected way, this film speaks to the new agony of banishment now being felt by millions of Ukrainians.” – Peter Bradshaw, THE GUARDIAN

“It matters little now whether Grappe meant to examine the consequences of Western complacency toward democracy’s enemies. Here we are, and here is this quietly poignant film, a heartbreaking reminder of the cost in individual lives and dreams.” – Austin Considine, New York Times