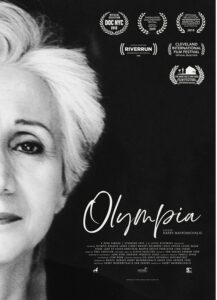 poignant story of a woman finding her own voice on her own terms to assert a gigantic creative force into the world. Rebelling against her suspicious Greek mother to assert her strong sexual drive, fighting the feeling she was “too ethnic” in Boston, and starting her own theatre company in New Jersey instead of waiting for the phone to ring, Olympia Dukakis models how to live life with blazing courage. Throughout an engrossing story that seamlessly blends past and present, she opens her heart and exposes her truest self to Harry Mavromichalis’ unobtrusive camera. The raw honesty with which Olympia leads us into the core of herself is what makes this film luminary. As fellow actors with whom she has shared the limelight Laura Linney, Diane Ladd, Whoopi Goldberg, and Armistead Maupin all testify, Olympia is “totally open and crazy”, which is what turns out to be the marker of her absolute sanity. OLYMPIA’s intimate portrait of a 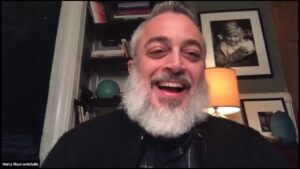 working class professional, a scholar actor of intuitive power, and a woman beloved around the world, culminates on the steps of the Dukakis’ humble ancestral home in Lesbos, Greece. Through her brutal honesty and sincerity, Olympia compels us to confront our own shortcomings and differences by letting go, and move forward with defiant conviction. Director Harry Mavromichalis takes a page from the Albert Maysles’ school of fly-on-the-wall verité documentary storytelling leaving the viewer with an appreciation of an artist becoming her own woman, on her own terms, primed to share her creative insights with the world.

For news and updates go to: olympiathefilm.com

About the filmmaker – Producer and Director Harry Mavromichalis – OLYMPIA is Harry Mavromichalis’ directorial feature documentary debut and he is currently in post-production for “Yankee Restraint”; a character driven piece that examines the intricacies of a gay relationship spanning decades and tackles issues of love and resentment.  After a long career as a modern dancer with his own dance company in New York, he pursued a Masters in Film Directing from New York University.  He wrote, directed and produced multiple short films, music videos and commercials. Curator of the inaugural LGBTQ Film Festival, Harry was a key organizer of the historic first-ever Pride Parade in Cyprus which attracted over 4,000 attendees.

About Olympia Dukakis – Born June 20, 1931 in Lowell, Massachusetts, the daughter of Greek immigrants, Dukakis earned two degrees from Boston University and worked as a physical therapist while pursuing a stage career. Olympia Dukakis won an Academy Award for her performance in Moonstruck, a role that also earned her a Golden Globe Award, American Comedy Award, and the Los Angeles Film Critics Award for Best Supporting Actress. She has appeared in more than 60 feature and short films, including Steel Magnolias, Cloudburst, Dad, Mr. Holland’s Opus, Working Girl, Look Who’s Talking I, II & III, Mighty Aphrodite, Jeffrey, Away From Her, among many others. Her television include : Big Driver, Sex & Violence, Forgive Me, Bored to Death, Last of the Blond Bombshells, Sinatra (Golden Globe Nominee), Joan of Arc (Emmy Nominee), Tales of the City, More Tales of the City (Emmy Nominee), Further Tales of the City among more than 40 others. She has performed in over 130 productions on and off-Broadway and regionally at theatres including the Public Theater, A.C.T., Shakespeare in the Park, Shakespeare & Co., and the Williamstown Theatre Festival, where she also served as Associate Director. She was a Founding member and Producing Artistic Director of the Whole Theatre in Montclair, NJ, for 19 years; also a founding member of the Actor’s Company and the Charles Playhouse in Boston. She continues to teach acting at NYU and master classes for professional theatre companies, colleges, and universities across the country. She was bestowed the National Arts Club Medal of Honor and her star on the Hollywood Walk of Fame was placed in 2013.

“It is a pleasure to spend time with Dukakis, who is always not just open to but hungry for revelation, growth, and connection, giving the documentary a deliciously buoyant quality.” – Nell Minow, RogerEbert.com

“Director Harry Mavromichalis, using extreme close-ups that caress the stunning, dramatic topography of [Dukakis’] face, eschews traditional narration and chases after the firebrand as she attends the unveiling of her star on the walk of fame.” – Andrea Simakis,Cleveland Plain Dealer