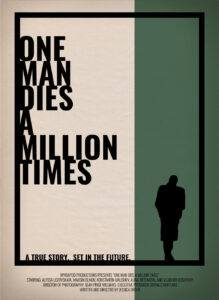 fall in love as the world wages war around them. A record-breaking, desperate winter sets in and the city slowly, painfully, begins to starve to death. Savagery transplants civility. Maksim and Alyssa defend the seed bank and its priceless collection of edible specimens from  the starving masses of the city, the enemy, hordes of rats, and each other. Alyssa (Alyssa Lozovskaya) and Maksim (Maksim Blinov) both work at the Institute of Plant Genetic Resources in the center of the city. The Institute houses the world’s first seed bank—an irreplaceable

trove of living genetic diversity which holds the potential both to preserve and transform modern agriculture. Part documentary, part legend, One Man Dies a Million Times is the true story of the seed bank and the botanists who worked there 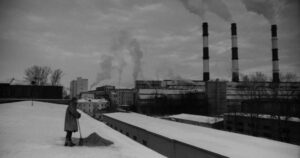 throughout the Siege of Leningrad (1941–1944). Though the characters portrayed in this film actually lived, and the events they experienced actually happened, this is not a reenactment. Director Jessica Oreck (Beetle Queen Conquers Tokyo, The Vanquishing of the Witch Baba Yaga) and cinematographer Sean Price Williams (Good Time, Her Smell, Frownland) artfully transplant their narrative from 1940’s Leningrad to a science fiction-inflected modern day.

For updates and screenings go to: myriapodproductions.com/oneman

About the filmmaker – Director, Producer, Writer, Editor Jessica Oreck makes projects large and small that hope to re-inspire a sense of wonder about the world of the everyday. She’s made a few features (Beetle Queen Conquers Tokyo, Aatsinki: The Story of Arctic Cowboys, and The Vanquishing of the Witch Baba Yaga). And she makes shorts too. She has two animated series for TED and several series for the soon-to-launch, online, educational, children’s network. This is Jessica’s first fiction film.

“One Man Dies a Million Times reflects a reckless ambition that it also, amazingly, fulfills…Jessica Oreck brings furious historical research and anguished empathy to the scientists’ struggle to survive and to protect the inestimable treasures that would nourish future lives…Sean Price Williams films in a hard and contrast-seared black-and-white palette. The images’ raw and tangled textures combine with the harrowing, turbulent action to evoke a Soviet-era super-spectacle rather than a low-budget American independent film.” – Richard Brody, The New Yorker

“A haunting meditation on the nature of humanity and how to survive our own downfall.” – Christopher Reed, Hammer to Nail