ONODA: 10,000 NIGHTS in the JUNGLE is based on the true story of Hiroo Onoda, 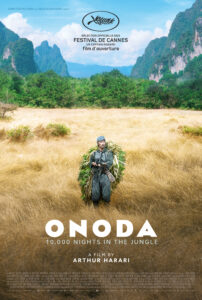 the legendary Japanese soldier who spent 30 years in the Philippine jungle, refusing to surrender because he was convinced World War II had not ended. Camouflaged by leaves and bark, shooting water buffalo for sustenance, Onoda will not believe even the recordings of his brother’s voice, imploring him to give up, or the magazine articles left for  him in the jungle, meant to enlighten him about a world

that had changed dramatically since 1944. (His response: paranoid conspiracy theories about the enemy concocting fake news.) Was Onoda a self-deluded fanatic or a paragon of patriotism? Harari’s poignant, epic drama reveals the complexities of the man who became a modern myth – and the inspiration for Werner Herzog’s recently published novel, The Twilight World. Director Arthur Harari (Dark Illusions) joins us to talk about the first time he heard this far-fetched tale, the importance of striking a balance heroic commitment and delusional denial, and the reaction to the film in Japan.

For more go to: darkstarpics.com

About the filmmaker – Arthur Harari was born in Paris in 1981 and has directed several short and medium-length films that have been screened in a large number of festivals. In 2017, his first film Dark Inclusion, was nominated for two César awards and won Best Male Newcomer for Niels Schneider. In 2021, his new film Onoda – 10,000 nights in the Jungle opens the Un Certain Regard section at the Cannes Festival.

“Harari never goes for easy pathos without counterbalancing it with the human cost of Onoda’s monomaniacal zeal, his semi-mystical devotion to a duty that died decades before.’ – Jessica Kiang, Variety

“Gaunt, wary and silent, Onoda looks like a ghost returning to the land of the living, a moment that eloquently sums up what he – and his country – lost in the collective madness of war.” – Mark Schilling, Japan Times

“This is essential viewing for anyone with a modicum of interest in WWII history. For the odd individuals that don’t have any interest, this is still well worth a watch because of the powerful character study at play.” – Sumner Forbes, Film Threat

“An intense character study of camaraderie and commitment emerges, one that also strikes a melancholy note about the power of propaganda and a life “lost” in service of a war that had long since ended.” – Amber Wilkinson, Radio Times

“Harari chooses to create a psychological portrait of his central character, using images rather than explanations of ideology to tap into Onoda’s mind-set.” – Teo Bugbee, New York Times