Addiction is an all-encompassing force, in not only of the lives of the afflicted, but 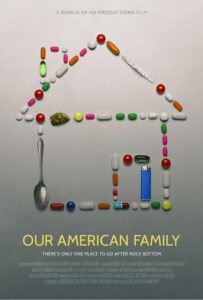 also those around them. OUR AMERICAN FAMILY provides an honest, unfiltered look at a close-knit Philadelphia family dealing with generational substance abuse. Captured at a pivotal “nothing to lose” moment, for over the course of a year, five family members tired of life with addiction on center stage, each struggle to transcend their crippling histories. What will it take to shift this entrenched, wrenching pattern in their lives? Will they be able to make

significant shifts to help their next generation? The members of OUR AMERICAN FAMILY – Nicole, Lynda, Bryan, Chris and Stephen – invite us into their lives to find hope and to explore what’s possible. Though they often falter, their familial loyalty is powerful,

demonstrating how through love and dedication people can rise out of the deepest depths. For a touching, eye-opening look into one of America’s most pressing crises, look no further. Co-directors Hallee Adelman (Writing with Fire, Us Kids, Truffle Hunters) and Sean King O’Grady (In A World, The Assistant, Dinner in America) join us for a remarkably candid look inside the internal dynamics of a family operating at the edge of viability as well as a dogged determination to not give up.

For screenings and updates go to: ouramericanfamilyfilm.com

About the filmmaker – Hallee Adelman is a writer, filmmaker, and co-founder of World of HA Productions. She is an executive producer on the Emmy-winning documentary “The Social Dilemma,” and the Oscar-nominated international film, “Writing with Fire.” Other titles include the Academy shortlisted, “The Truffle Hunters,” the Sundance premiere “UsKids,” and the soon to be released, “Art & Krimes by Krimes.” Recent festival premieres, “Aisha,” “Broadway Rising,” and “Your Friend, Memphis.” Adelman is a Board Member of the International Documentary Association. Adelman co-directed and produced OUR AMERICAN FAMILY after a writing project deepened her connection with the brave participants featured in the film. For more go to: halleeadelman.com

About the filmmaker – Sean King O’Grady is a filmmaker based in Michigan. His award-winning feature films have screened at Sundance, Tribeca, Telluride, Berlinale, Sitges, SXSW, Woodstock and dozens of other festivals around the world. As a producer, he has worked on FOR LOVERS ONLY, BIG SUR, IN A WORLD…, DINNER IN AMERICA, THE ASSISTANT, USERS, and most recently the SXSW winning I LOVE MY DAD, with THE LISTENER in post-production. He also was an Executive Producer on the Netflix limited series LIVING UNDOCUMENTED. Sean has directed LAND GRAB, WE NEED TO DO SOMETHING, REVOLUTION: GMC HUMMER EV, and an entry in MTV’s long running series TRUE LIFE. He co-directed OUR AMERICAN FAMILY with Hallee Adelman.

“Addiction is a complex, challenging topic, and “Our American Family,” in its sharp specificity, handles it with grace.” – Natalia Winkelman, New York Times

“Heartbreaking, unflinching and inspirational. It’s a poignant cautionary tale and powerful wake-up call. As Pablo Neruda’s poem wisely states, “They can cut all of the flowers, but they can’t stop the spring from coming.” – Avi Offer, NYC Movie Guru

“One of the most blunt and intimate documentaries you’re ever likely to see.” – Rob Aldam, Backseat Mafia

“Our American Family is a brutally honest documentary that gives viewers an inside look into how addiction affects families.” – Raquel Stecher, Quelle Movies