Set centuries apart but in the same place, OVID AND THE ART OF LOVE tells 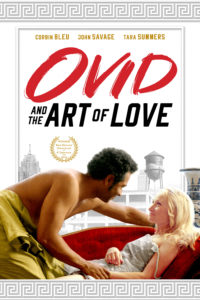 the story of the renowned Roman poet Ovid, whose comic verses and permissive lifestyle provoked the brutal Emperor Augustus’s ire. As Ovid and the emperor’s granddaughter – thrown together by fate – race to escape execution, Ovid’s story asks: In a world of unrest, is love the most radical act of all? Bringing together togas, high-tops, oration, poetry slams and hip-hop, this film tells a timely story about power, pleasure and politics. Strong women characters clamor for respect and a better place in society. All is set amongst the faded beauty of modern Detroit’s neoclassical architecture. Corbin Bleu (High School Musical) masterfully transforms into the poet Ovid, whose work has been cherished for over 2,000 years, while John Savage (The Deer Hunter) gives an electrifying performance as Augustus, Ovid’s conflicted nemesis. Tara Summers (Mercy Street, Boston Legal) plays Julia, Augustus’s tough, rebellious daughter, and Tamara Feldman (Gossip Girl, Hatchet) is the emperor’s activist granddaughter. Also starring Joseph McKenna (Shutter Island, 12 Monkeys) and Lailani Ledesma (Comedy Central’s Detroiters). Director and writer Esmé von Hoffman joins us to talk about her decision to recast this tale of a free-thinking Roman artist speaking truth to power as a modern parable.

For news and updates go to: ovidandtheartoflove.com

create a unique and topical world. An American-German dual citizen, born and raised in the U.S., Esmé has directed several shorts and has worked as a film editor on Alex Ross Perry’s Listen Up Philip, and Desiree Akhavan’s Appropriate Behavior and as a producer. She received a Sudler Fund for the Arts grant for her 16 mm film “Oblivion” and was commissioned to produce and direct a series of short documentaries, including one profiling three editors at The New York Times. Esmé was president of the Yale Film Society, where she oversaw visits of industry leaders including David Lynch, Alexander Payne and Doug Wick. She recently served as Director of the Filmmaking Program at The Edit Center in New York City.

“Though Detroit may seem like an unusual backdrop for a classic story of government intrigue, politicking, and romance, the urban setting works … attracting an aware, woke audience who are almost certainly overdue for discovery of the charms of a 2000 year old poet.” – Picture This Post

“Corbin Bleu masterfully transforms into the poet Ovid, whose work has been cherished for over 2,000 years, while John Savage gives an electrifying performance as Augustus, Ovid’s conflicted nemesis.”– Vimooz

“Such a novel film … extremely entertaining and enlightening… ”– Debbie Elias, Behind the Lens, Adrenaline Radio

“Writer/director Esme von Hoffman has taken the risk of trying to blend the customs and costumes of Ancient Rome with the vibe of 21st century America … giving viewers a sometimes quirky, sometimes humorous, and sometimes brutal film that is unlike most of the fare on today’s big screens.” – Theatre Byte