PARIS CALLIGRAMMES is an epic self-portrait of Ulrike Ottinger, one of 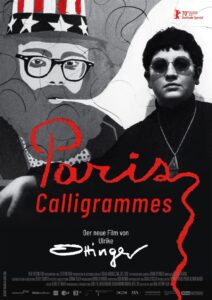 Germany’s most prominent contemporary avant-garde artists, known for her paintings, photographs, and, above all, her films. An impressive and extensive archive of sensorial memories, historical photographs, and documentary footage traces the early influences of Ottinger’s life in Paris in the 1960s. This was a time marked by her integration into the rich intellectual and cultural circles of the city, but also engagement in the political and social eruptions around the Algerian War and May 1968. These varied dimensions of her experience make PARIS CALLIGRAMMES an essential historical time capsule, beautifully interwoven with the most precious of

memories and images. In a rich torrent of archival audio and visuals, paired with extracts from her own artworks and films, Ottinger resurrects the old Saint-Germaindes-Prés and Latin Quarter, with their literary cafés and jazz clubs, and revisits encounters with Jewish exiles, life

with her artistic community, the world views of Parisian ethnologists and philosophers, the political upheavals of the Algerian War and May 1968, and the legacy of the colonial era. Director Ulrike Ottinger (Seven Women, Seven Sins, Ticket of No Return, Johanna d’Arc of Mongolia) joins us for a conversation on her life as young painter in Paris in the 1960s, and her personal memories of Parisian bohemianism and the serious social, political and cultural upheavals of the time into a cinematic “figure poem” (calligram) in “Paris Calligrammes”.

For news and updates on the Ulrike Ottinger go to: ulrikeottinger.com

“In Paris Calligrammes, the artist Ulrike Ottinger casts a highly personal and subjective gaze back to the twentieth century. At the heart of her film is Paris: its protagonist is the city itself, its streets, neighborhoods, bookstores, cinemas, but also its artists, authors, and intellectuals. It is a place of magical appeal, an artistic biotope, but also a place where the demons of the twentieth century still confront us.” – Bernd Scherer

“One of the great works of first-person cinema. Ottinger’s personal and political masterwork. Extraordinary; a work of vital and energetic modernism.” – Richard Brody, The New Yorker

“Enriching, stimulating; vital and contradictory. Captures the zeitgeist as experienced by a young woman eager to soak up the cultural riches around her, which she then distilled through her own sensibility to create paintings reflecting the era’s upheavals.” – Jay Weissberg, Variety

“Never a dull moment; the work of a consummate artist who understands the importance of the form matching the story.” – Kaleem Aftab, Cineuropa

“Her cinema is restless, Odyssean: full of stories of exile and adventure. [‘Paris Calligrammes’ is] an homage to the intellectual and artistic life of the city in the 1960s.” – Amy Sherlock, Frieze Magazine