PASANG: IN THE SHADOW OF EVEREST, brings to life the untold and inspiring 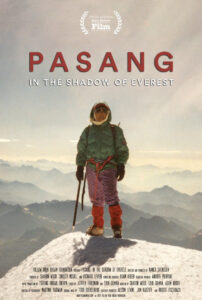 story of Pasang Lhamu Sherpa, the first Nepali woman to summit Mt. Everest who, in her quest, awakened her country to the entrenched inequalities confronted and endured by women and in Nepal. As an uneducated, indigenous woman and a Buddhist in a Hindu kingdom, Pasang’s dream to scale the legendary mountain pit her against family, foreign climbers, her own government, and nature itself. PASANG: IN THE SHADOW OF EVEREST follows Pasang as she works tirelessly to pull together the financial and structural support to try for Everest, and the ensuing obstacles and disappointments she had to face and overcome

along the way. Her determined pursuit of Everest plays out within the context of her nation’s struggle for democracy and the emergence of a booming commercial climbing industry in the Himalaya. As told by the Nepalis who knew her, by some of the world’s most notable

alpinists, and by Pasang herself, PASANG: IN THE SHADOW OF EVEREST reveals the intransigence of the forces who opposed her, and the great burdens and personal costs she endured to gain her rightful chance to try for Everest. Director Nancy Svendsen joins us to talk about the cultural and religious fault lines under the surface of the worlds in which Pasang had been laboring while simultaneously illuminating the high points of her legacy– the scores of triumphant Nepali women mountain climbers who have carried her torch and since reached Everest’s peak.

For news and updates go to: pasangmovie.com

About the filmmaker – Nancy Anne Svendsen grew up in small towns in Iowa. Since childhood, she has been passionate about bringing people together to tell stories. After finishing college and business school, Nancy spent more than the next two decades focusing her energies in leadership positions in various facets of the healthcare industry. Returning to her storytelling roots, Nancy became an independent filmmaker based in Northern California, beginning with a short documentary entitled Svend (2013) about an effort to preserve a historic wooden boat class in the San Francisco Bay. Combining her love of storytelling with her experience running large organizations and her passion for women’s rights, Nancy founded the Follow Your Dream Foundation Inc., a 501(c)3 organization, as a place to incubate and launch powerful stories that can influence people’s lives.  Exposure to the story of Pasang Lhamu Sherpa by Pasang’s brother, who is Nancy’s brother-in-law, would spark a deep desire to tell Pasang’s story, a quest that would culminate some ten years later with the release in 2022 of her documentary feature film, Pasang: In the Shadow of Everest. An active musician, Nancy Svendsen lives in Marin County, California with her husband and their two children. Pasang: In the Shadow of Everest is her feature film directorial debut. Find out more about Follow Your Dreams