In an increasingly digital universe where live streamers earn as much as $200,000 a month, can virtual relationships replace real-life human connection? PEOPLE’S REPUBLIC 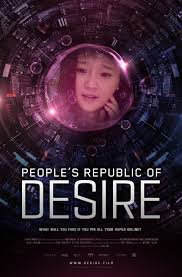 OF DESIRE tells the stories of two such online stars who have risen from isolation to fame and fortune on NASDAQ-listed YY, China’s largest live streaming platform. Live-streaming  showrooms have become virtual gathering places for hundreds of millions – from the super rich who lavish these online stars with digital gifts, to poor migrant workers who exhaust meager savings idolizing them. All of these characters are brought

together in a series of bizarre online talent competitions, where they discover that happiness in their virtual world may be as elusive as in the real one. Director Hao Wu talks with us about his mind-boggling, high-energy documentary that chronicles a technical /social revolution taking place in the world’s most populous country.

For news and updates go to: desire.film

“Provocative and unsettling as it brings us on a guided tour through the digital marketplace for something resembling human contact.” – Variety

“The ability of “People’s Republic of Desire” to show these familiar desires playing out in futuristic surroundings is invariably surprising and never less than compelling.” – Kenneth Turan, Los Angeles Times

“A microcosm of the bizarre fantasy economy and complex, parasitic interdependencies of late capitalism as a whole.” – Katie Rife, AV Club