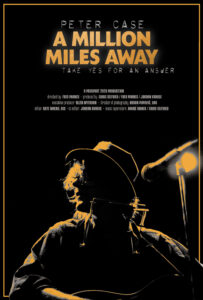 crushing lows. From the frigid suburbs of Buffalo NY, to his early years living and busking on the streets of San Francisco, to formative experiences with punk band The Nerves and leading the LA power-pop legends The Plimsouls, and now his decades-long, Grammy-nominated solo career, this film walks a million miles in the shoes of one of America’s last great troubadours. brilliant, elusive, sometimes infuriating, and always fascinating Peter Case. A gifted musician who had never found the widespread acclaim they deserved, but who

had still managed to find a place in the unforgiving landscape of the music business. Peter Case is a unique and compelling artist with a fascinating life story both heartbreaking and hopeful, who had spent the past four decades steadfastly answering his

artistic calling. A dynamic performer, a gifted raconteur with a master storyteller’s flair, a passion for social justice, and a ripping sense of humor. Peter Case: A Million Miles Away features many of Peter’s friends and colleagues, including singer/songwriters; Ben Harper, Steve Earle, Victoria Williams, Jack Lee as well as producers; Van Dyke Parks, Mitchell Froom, Steven Soles, Hobart Taylor and Denise Sullivan. Director Fred Parnes (A Man Is Mostly Water) joins us to talk about his riveting portrait of a musician and artist who has made a career out of charting his own course.

For more on Peter Case go to: petercase.com

About the filmmaker –  Fred Parnes’ first film was Spread the Word, a documentary about a cappella legends The Persuasions. It had a long festival run before finding its eventual home on PBS.  He followed that with the indie comedy A Man Is Mostly Water, which featured the first screen performance of actor Anton Yelchin. He was nominated for Best Screenplay at the 2008 Independent Spirit Award for Starting Out in the Evening, which he wrote and produced with director Andrew Wagner.They re-teamed in 2017 to write and produce Breakable You, starring Holly Hunter, Tony Shalhoub and Alfred Molina. In 2019 he directed the interviews for the documentary Love, Antosha.