PHARMA BRO chronicles the shoot star life and times of Martin Shkreli, the 38-year-old financial entrepreneur and pharmaceutical tycoon from 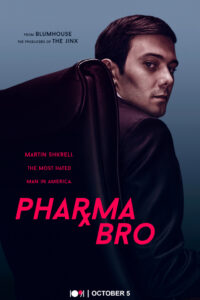 Brooklyn, New York, was dubbed “the most hated man in America” by the media after he rose to infamy in 2015 for price gouging the prescription drug Daraprim by 5500% overnight depriving patients of the life-saving medication. Hodge presents a new in-depth look on the all-too familiar media tale in PHARMA BRO a concentrated year-long study of the man who defies traditional categorization. Through traveling to Shkrel, Albania to learn about his heritage and uncover his backstory; visiting hospitals and talking with Daraprim patients; watching countless hours of his live-stream; and uncovering the real story about the Wu-Tang album, Hodge is able to provide new and alternative insight from a variety of sources, who offer commentary on Shkreli and his story of promising financial savant turned pharma opportunist and the fortune he acquired at the detriment of others. Combining live streams, sit-down

interviews, news footage, filmed scenes and actual encounters with Shkreli, Hodge presents a prismatic image of PHARMA BRO, the differing sides he consciously (and sometimes unconsciously) presented and a cinematic examination of the qualities that earned him his most hated status. The film features Wu-Tang Clan’s Ghostface Killah, musical artist The Fridge, Journalist Christie Smythe, and Shkreli Defense Attorney Ben Brafman. Director Brent Hodge (A Brony Tale, I Am Chris Farley, Freaks and Geeks: The Documentary) joins us for a lively conversation on why he wanted to go behind the headlines to explore the how and why of the Shkreli’s life as well as his personal commitment to being even-handed in telling the whole story of “the most hated man in America.”

For news and updates go to: 1091pictures.com

“Who knew such a reprehensible man could be fodder for such a phenomenal documentary?” – Bobby LePire, Film Threat

“This is a wild ride and a stellar example of our schadenfreude watching him go down.” – Anne Brodie, What She Said