RISING PHOENIX tells the extraordinary story of the Paralympic 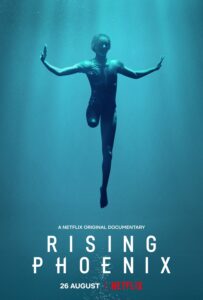 Games. From the rubble of World War II to the third biggest sporting event on the planet, the Paralympics sparked a global movement which continues to change the way the world thinks about disability, diversity & human potential.The film features breathtaking footage and compelling interviews with several Medal-Winning Paralympians including Tatyana McFadden (Para Athletics,

Co-directors Peter Ettedgui and Ian Bonhôte makers of the BAFTA nominated McQueen, join us to talk about remarkable athletes who have worked most of their lives to fulfill the dream of being an Olympic champion as well as the story of the ParaOlympic founder, Ludwig Guttman, a Jewish doctor who rescued people from Nazi camps and believed in the power of community to heal and empower.

To watch go to: netflix.com/Rising Phoenix

To coincide with the UN’s International Day of Persons with Disabilities, the film team have launched an educational website for RISING PHOENIX that includes a down-loadable Education Guide, providing a framework and resources to enable teachers to delve deeper into the subject matter in the classroom.

About the filmmaker – Peter Ettedgui’s ‘Rising Phoenix’ marks Peter’s second feature documentary as writer and director with Ian Bonhôte, following their collaboration on ‘McQueen’ in 2018. Described as “supremely engrossing and elegant” by Variety, the film was nominated for two Baftas (British Film and Documentary). Previously, Peter had cut his teeth in the non-fiction arena as writer of ‘Everything Or Nothing’ (the story of James Bond) and ‘Listen to Me, Marlon’ (a film biography of Marlon Brando told through the actor’s audio archive), for which Peter was the recipient of a Peabody Award and the IDA (Independent Documentary Award) for best writing in a documentary. Peter began his career in narrative fiction. He worked as director’s assistant and co-writer to Ken Russell on a number of feature and television projects, before writing screenplays including the Bafta-nominated ‘Onegin’, an adaptation of Pushkin’s classic tale of unrequited love, which starred Ralph Fiennes and Liv Tyler. He went on to produce films such as ‘Kinky Boots’, starring Joel Edgerton and Chiwitel Ejiofor, which became a hit Broadway/West End musical, and ‘Unmade Beds’ for Film4.Beyond his work as writer and producer, Peter has worked extensively as a development consultant and story editor including on ‘Spectre’ the 2017 Bond movie.  For more go to: misfitsentertainment.com

About the filmmaker – IAN BONHÔTE is a two times BAFTA nominated director and producer for MCQUEEN, a feature documentary on Alexander McQueen the iconic fashion designer. RISING PHOENIX is Ian’s second documentary which he has co-written and co-directed alongside Peter Ettedgui. The film covers the story of the Paralympics from its humble beginning to becoming the third biggest sporting event in the world. Ian’s directorial debut, ALLEYCATS, was distributed internationally by Universal pictures in over 25 territories and by Filmmode in the US/Canada. Following this, Ian co-founded MISFITS ENTERTAINMENT alongside Andee Ryder, the producer of Alleycats. In 2018 Misfits Entertainment produced VIKING DESTINY, an action adventure film starring Terence Stamp. Prior to this, Ian co-founded PULSE FILMS in 2005 alongside Thomas Benski and Marisa Clifford. Pulse Films recently produced GANGS OF LONDON and AMERICAN HONEY (2016 Jury Prize Cannes Winner). The company is now a part of the VICE MEDIA GROUP. Ian has also directed international campaigns, music videos and fashion films for clients such as Puma, Nike, Pepsi, Mumford & Sons, Tom Jones, and fashion designers Matthew Williamson and Hussein Chalayan. For more go to: misfitsentertainment.com

“‘Phoenix’ is a testament to resiliency, determination and passion, and is one of the best documentaries of 2020.” – Randy Myers, San Jose Mercury News

“There are athletes all across the spectrum of sport who would kill to have a documentary portray them as heroic, epic and badass as Ian Bonhôte and Peter Ettedgui paint the superstars in “Rising Phoenix. – Roger Moore, Movie Nation

“This is profoundly inspiring… It is an extraordinary look at what makes us human.” – Wade Major, FilmWeek (KPCC – NPR Los Angeles)