Born Marianne Joan Elliott-Said in July of 1957, Poly Styrene was the first woman 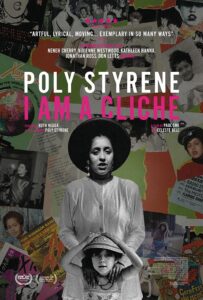 of color in the UK to front a successful rock band. She introduced the world to a new sound of rebellion, using her unconventional voice to sing about identity, consumerism, postmodernism, and everything she saw unfolding in late 1970s Britain, with a rare prescience. But the late punk maverick didn’t just leave behind an immense cultural footprint. She was survived by a

she examines her mother’s unopened artistic archive and traverses three continents to better understand Poly the icon and Poly the mother. Co-directors Celeste Bell (Poly’s daughter) and Paul Sng have fashioned a clear-eyed, and utterly moving documentary about the turbulent live of X-Ray Spex’s Anglo-Somali punk musician / front woman, who went on to be a key inspiration for the 1980’s riot grrrl and Afropunk movements and who’s personal story of determination continues to inspire.

For news and updates go to: polystyrenefilm.net

About the filmmaker – Celeste Bell spent her earliest years living on a Hare Krishna commune in the Hertfordshire countryside with her mother, Poly Styrene. After completing her degree from Queen Mary University of London, Celeste settled in Madrid where she worked as a teacher and formed ska-punk band Debutant Disco. After finishing a Master’s degree in Barcelona, Celeste returned to London to work alongside Zoë Howe on Day Glo! The Poly Styrene Story, published by Omnibus Press in 2019. They then joined forces with Paul Sng to make Poly Styrene: I Am a Cliché, a film to accompany the book. Celeste currently manages her mother’s artistic estate, co-curating an exhibition alongside Mattie Loyce at the 198 Contemporary Arts and Learning Centre in Brixton. She plans to tour the exhibition internationally after the pandemic and is currently working on her project, with the working title of Mr. Gorbachev and the Krishna Kids.

About the filmmaker – Paul Sng is a British-Chinese filmmaker whose work focuses on people who challenge the status quo. Sng’s films are driven by methodical research, creative storytelling and a collaborative approach that strives for inclusivity and diversity in people and subjects. His films have been broadcast on UK national television and screened internationally, and include Invisible Britain, Dispossession, and Social Housing, Social Cleansing. Underpinning all of Sng’s work is an eye for strong characters and compelling narratives, all the while working to establish and maintain trustful  relationships with people in front of and behind the camera.

“Poly’s daughter has done her proud with an intimate, yet all-encompassing portrait of an extremely talented and complex woman. “Poly Styrene: I Am a Cliché” is yet another in a string of fabulously engaging rock docs.” – Laura Clifford, Reeling Reviews

“Above all else this is a love-letter to the woman behind Poly Styrene as much as it is to the ground-breaking punk pioneer herself.” – Alexandra Heller-Nicholas, AWFJ Women on Film

“As a double portrait of daughter and mother, it covers a range of emotions and concludes with a moving and poetic illustration of the women’s deep bond.” – Betsy Sherman, Arts Fuse

“In a genre often saturated with sugar-coated stories and selective memories, Poly Styrene: I Am a Cliché proves to be anything but.” – Rachel Reeves, Consequence

“personal with the historical to produce a documentary of profound impact and style.” – James Hanton, Outtake Mag

“The documentary that unfolds manages to be both frank and desperately delicate, rather like its subject, as it gives us an intimate look at Poly Styrene’s life.” – Emma Simmonds, The List