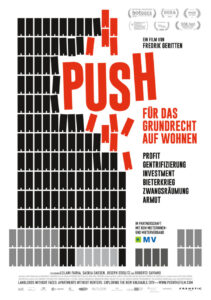 of the systemic corruption that continues to drive the world’s affordable housing toward the edge of collapse. All of which is happening while many of the world’s largest financial and real estate institutions are facilitating a tidal wave of dark money from organized crime, human trafficking, illicit drugs trade and illegal tax “shelters” into the legitimate world of finance. Housing prices are skyrocketing in cities around the world. Incomes are not. PUSH sheds light on a new kind of

faceless landlord, our increasingly unliveable cities and an escalating crisis that has an effect on us all. This is not gentrification, it’s a different kind of monster. PUSH follows Leilani Farha, the former UN Special

Rapporteur on Adequate Housing, as she’s travels the globe, trying to understand who’s being pushed out of the city and why. Director Fredrik Gertten and film subject Leilani Farha join us for a spirited conversation on the state of the world’s housing stock and how homeownership, real estate and high finance has been such a determinate factor on our society, both past and present.

For news, screenings and updates go to: pushthefilm.com

About the subject – Leilani Farha has a background in advocacy for the homeless and for three years Leilani was the UN Special Rapporteur on Adequate Housing, with the right to hold governments accountable if they don’t meet the human rights obligations in the UN Human Rights Charter. She believes that if we really want to make change to ensure people can live in the city.then we have to be able to hold someone responsible for what is going on. Currently Leilani is the Global Director for Make the Shift, a worldwide movement to secure the human right to housing.

About the filmmaker – Fredrik Gertten is an award-winning Swedish director and journalist. His latest works BECOMING ZLATAN (2016), BIKES VS CARS (2015), BIG BOYS GONE BANANAS!* (2012) and BANANAS!* (2009) have met audiences in over 100 countries and screened at leading festivals. In 1994, Fredrik founded the production company WG Film. He previously worked as a foreign correspondent and columnist for radio, TV and press in Africa, Latin America, Asia and around Europe. Today he combines filmmaking with a role as a creative producer at WG Film – one of Sweden’s most prominent documentary production companies, famous for local stories with a global understanding and impact. In October 2017 Fredrik was named Honorary Doctor at Malmö University’s Faculty of Culture and Society for his work as a documentary filmmaker.