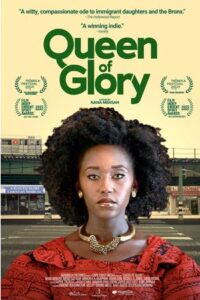 Sarah Obeng (Nana Mensah),  a doctoral student at Columbia University, is weeks away from following her very married boyfriend to Ohio when her mother dies suddenly. Her inheritance? A small, but beloved, Christian bookstore in the Pelham Parkway section of the Bronx where she was raised in the tight-knit Ghanian immigrant community. Tasked with planning a culturally respectful funeral befitting the family matriarch, Sarah must juggle the expectations of her loving yet

demanding family while navigating the reappearance of her estranged father all while grappling with what to do with the bookstore. Aided by an only-in-New York ensemble of Eastern European neighbors, feisty African aunties and a no-nonsense ex-con co-worker, Sarah faces her new

responsibilities while figuring out how to remain true to herself. Director / writer / lead actor Nana Mensah joins us for a conversation on her belated decision to tackle her multi-hyphenated roles in making the film, spotlighting Ghanian culture and assembling a very talented cast of actors able to do justice to the poignant portrayals that lift Queen of Glory into the realm of something truly special.

For updates and screenings go to: filmmovement.com/queen-of-glory

from a story whose familiarity is offset by its humor and authenticity. “ – Nick Schager, Variety

is a love letter to children of Ghanaian immigrants and to the Bronx.” – Lovia Gyarkye, The Hollywood Reporter

“In Queen of Glory, writer-director-star Nana Mensah has put forth a striking New York story that is both hopeful and true to life. Mensah proves herself as a triple-threat, marking the beginning of a bright new face in indie film.” – M.J. O’Toole, Hammer to Nail

“Queen of Glory is funny and charming, bringing an intensely relatable tone and familiar story with a new edge.” – Rebecca Cherry, Film Carnage

for her many talents.” – Stephen Saito, Moveable Fest