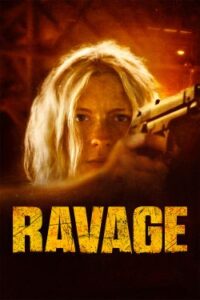 Jones), a young nature photographer on assignment in the woods of the Watchatoomy Valley, captures a disturbing event of a man being brutally whipped and beaten in the woods. After reporting the incident to the local sheriff, she is quickly captured by the culprits and taken to an abandoned farm in the woods to be tortured. Due to Harper’s experience as a survivalist she is able to escape but is on the run and has to quickly outsmart capturers. Harper explains to the Police how she fought her way out of the Watchatoomy Valley, they dismiss her crazed and violent story as a meth-induced nightmare. The RAVAGE also features two-time Oscar-nominee Bruce Dern (ONCE UPON A TIME IN HOLLYWOOD, PEANUT BUTTER FALCON, NEBRASKA,

COMING HOME) and Robert Longstreet (DOCTOR SLEEP, HALLOWEEN KILLS). RAVAGE Director / Writer Teddy Grennan joins us to talk about his skillful blending of the sights and sounds that produce a heart-pounding story that ranges from the damsel in distress to a bad-ass warrior woman a la Ripley.

For news and updates go to: brainmedia.com/films/ravage

RAVAGE opens at select drive-ins on August 14th and August 21st via video on demand everywhere you can rent or buy movies.

“”RAVAGE” is a tension filled, realistic horror movie about the evil that men do and how things can go very wrong very quickly. It presents a strong female character who isn’t waiting around to be rescued […]. She’s not a super powered spy or superhero, just any ordinary woman who refuses to lie down and die.”- Dolores Quintana, Nightmarish Conjurings