Based on a non-fiction novel RECON is set in the mountains of Italy at the close of the Second World War. Adapted from the critically acclaimed New York Times 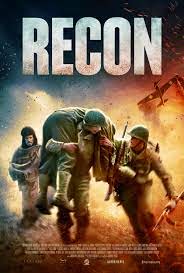 best seller by famed author Richard Bausch, and based on a true event – RECON tells the story of four American soldiers in WW2, who after they witness a vicious murder of an innocent civilian at the hands of their platoon Sergeant, are sent on a reconnaissance/suicide mission lead by a local partisan, an elderly man whose indeterminate loyalties add to the terror and confusion that engulfs the Americans as they are hunted by an unseen enemy. RECON centers around young men in the midst of war. The action occurs over the course of one long day between four soldiers placed in a crucible, as they debate both their fates and that of life itself.

Each has a different perspective, liberal, racist, =uncertain – a metaphor for the America both of 1945 and 2018. As the soldiers fight amongst themselves they realize they are being both hunted and haunted by a mysterious sniper and the specter of a burning question – is their Italian guide, this old man from the village, a fascist sympathizer who wishes to lead them to their death? As they struggle to make it off the mountain alive, these American soldiers face the worst that war can offer men…. and through this each finds their own peace. Director Robert Port stops by for a conversation on the challenges of meeting the expectations set by an award winning novel, working with a very talented cast of young actors and capturing a tone and look that puts you in the middle of this intense drama.

For news and updates go to: brainmedia.com/films/recon

About the making of RECON – The novel, RECON, based on a true military event, was written by Air Force veteran Richard Bausch; it was awarded the 2010 Dayton International Literary Peace Prize. “Peace” will be re-published by Penguin Random House as an e-book in October. RECON stars Alexander Ludwig (BAD BOYS FOR LIFE, THE HUNGER GAMES, “Vikings”) Sam Keeley (BURNT, “68 Whiskey”), Chris Brochu (DYNASTY, “Shameless”) and Italian acting legend Franco Nero (DJANGO UNCHAINED, JOHN WICK: CHAPTER 2). The film is produced by Rick Dugdale and Richard Bullock and executive produced by Maury Povich. Writer/director Robert Port won an Academy award for his film TWIN TOWERS, a documentary short about Detective Joe Vigiano, an elite New York City policeman who was killed during the tragic events of 9/11. RECON is Robert Port’s feature debut.

“Recon remains focused on completing its mission, delivering a solidly suspenseful tale of troops caught in a bad situation that’s about to get a whole lot worse.” – Andrew Parker, The Gate