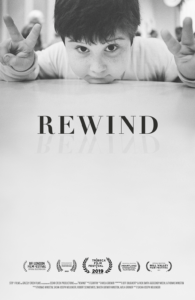 childhood and the events that tore apart his seemingly-perfect world. For as long as Neulinger can remember, his father was constantly filming— from birthday parties, to hockey games, to holidays. But his camera, trained on the frequent gatherings of a tight-knit family, was also documenting a hidden secret, the revelation of which would lead to a media firestorm, a high-stakes court battle, and a generational reckoning. Drawing upon an incredibly revealing home video archive, Neulinger revisits these events 20 years

later to piece together an unflinching story of the cycles and consequences of abuse, to examine what it means to heal, and to use those experiences to

effect positive change in the world. REWIND probes the gap between image and reality and proves just how little, and how much, a camera can capture. Director Sasha Joseph Nuelinger joins us for a candid conversation on the psychological, physical and emotional impact of abuse and how he was able to find the appropriate balance in his role as creator and director telling a story of unspeakable horror about himself and his family.

For news and updates go to: RewindDocumentary.com

For more about Rewind go to: rewinddocumentary.com

“Watching the movie is like staring at a blurred image of the past that gradually, over 86 minutes, comes into terrifying focus… A documentary like this one has the effect of a moral thriller.” – OWEN GLEIBERMAN, VARIETY

“Rewind,” as indelibly as any film ever made, illustrates how the very process of investigating your own past can be a trauma unto itself. ” – DAVID EHRLICH, INDIEWIRE

“Somehow in documenting the family’s unraveling, Neulinger comes to show the strength that certain members were able to give to another… there is tremendous power in seeing the filmmaker taking the bad to make some good out of it, capturing the best and worst that humans are capable of in one brave and truly exceptional film.” – STEPHEN SAITO, THE MOVEABLE FEST

“Neulinger’s film, like any great documentary, maintains a steady drip of details whose importance are only revealed later… Rewind not only offers the story of a victim’s ordeal, but a brave and resilient spirit.” – ROBERT DANIELS, 812 FILM REVIEWS

“Sasha Joseph Neulinger’s wrenching surival story is an astounding documentary on sexual abuse trauma… The utter honesty behind these scenes could only be captured in a documentary.” – ANDREW BUNDY, THE PLAYLIST