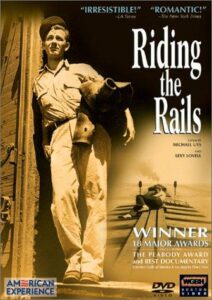 during the 1930s, a time of desperation and bitter hardship. These young itinerant Americans were all searching for a better life; what they found was a mixture of freedom, camaraderie, misery, and loneliness. RIDING THE RAILS interweaves the evocative stories of ten men and women who left home in their youth. Producers Michael Uys and Lexy Lovell placed notices in national publications in search of individuals who rode the rails as teenagers. Three thousand people, now in their 70s and 80s, responded. Uys and Lovell selected a handful to tell their stories on camera. “Some hadn’t spoken of their experiences in sixty years. They poured their hearts out to us,” says Uys. “They were just kids then and when they look back, it’s with a blend of nostalgia and pain.” RIDING THE RAILS vividly combines the clear-eyed

memories of witnesses with archival footage of teens riding atop speeding trains and newsreel interviews with lean-bodied kids full of bravado. RIDING THE RAILS features a rich soundtrack of American folk tunes of the time, including songs by Woody Guthrie, Elizabeth Cotten, Doc Watson, and Jimmie Rodgers. RIDING THE RAILS co-director and co-producer Michael Uys joins us to talk about a misunderstood era in our nation’s history, and his recollection on the making of a still relevant documentary classic.

For more go to: pbs.org/wgbh/americanexperience/films/rails

For more about the film go to: ridingtherails-themovie.com

For more about Michael Uys go to: erroluys.com

“I think it’s wonderful. I really think it’s very moving and beautiful, and I think it’s important. Riding the Rails is a natural. I’m astonished that it hasn’t been done through all these years. It’s one of the vital, terribly unreported sagas of the thirties. With today’s homeless kids, it’s a contemporary story of overwhelming importance. The analogy may awaken a public conscience that has been too long asleep. I thank you for making this movie. It’s terrific.” – Studs Terkel

“Excellent! Not only fascinating history, but it is poignant and evocative on an emotional level as well.” – Kenneth Turan,  Los Angeles Times

“Moving and informative, this is a winning documentary… From the sad and stirring folk songs on the sound track to the unforgettable faces and stories, Riding the Rails is a historical journey well worth taking.” – David Hunter,  The Hollywood Reporter

“As straightforward as a stretch of prairieland track, Riding the Rails succeeds on all counts. These stories — the sharecropper’s son who was a financial burden to his family, the French boy beaten by his parents, the kid who wanted to see America and play the guitar, the girl who stormed out of the house after a fight with her dad — are fascinating character studies. Taken as a whole, they depict a time when rampant poverty and desperation forced thousands of youths into the itinerant life, begging for change and food, sleeping in hobo encampments and hoping for a better tomorrow.” – Steven Rea,  The Philadelphia Inquirer