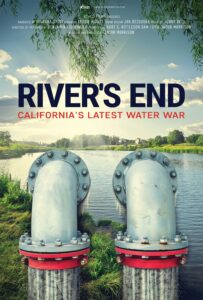 It reveals how water politics that led to the draining of the Owens Valley by Los Angeles,

made famous by the film CHINATOWN, continue to this day in ongoing efforts to take ever more water from Northern California’s San Francisco Bay estuary. Except this time, the water grab is at the hands of  industrial

agriculture and its powerful corporate investors. RIVER’S END inspires viewers to learn where their water comes from so that we can save our rivers and the ecosystems and communities that depend upon them. Director Jacob Morrison joins us for a informative conversation on the byzantine, arcane and extremely powerful system of public and private water interests with a history of land grabs and violent intimidation.

For news and updates go to: riversendfilm.com

Director’s Statement – In RIVER’S END, we pull back the curtain on California’s complex water system, where moneyed interests are gaming the system. Constant battling over a limited water supply heralds an impending crisis—not just in California, but around the world. A quarter of humanity now faces a looming water crisis. If we can understand California’s challenges, I believe we will better understand those now facing China and Tibet, India and Pakistan, Chile, South Africa, and elsewhere.  Five years ago, I found a sunken boat along Pier 42 in San Francisco. A local explained that the boat’s owner was a lifelong salmon fisherman. The decimation of the local salmon population due to water diversions had destroyed his business. Facing the loss of his livelihood and mounting debt, he became drunk and allowed himself to sink to the bottom of the Bay. Also tragic was the reason for the water diversions that destroyed his life: agriculture in the Central Valley needed more water to grow crops that are largely shipped overseas. Because of this, six fish are nearing extinction in the California Bay Delta, including species of salmon. But once I began investigating, I learned that not only is water being diverted from dwindling ecosystems for the benefit of farms, but that many of those farms are massive corporate entities looking to take even more water. A proposed multi-billion dollar tunnel system, if operated at the behest of these business interests, could forever destroy California’s native salmon and other species. And as I looked into California’s history, I found that the Golden State has yet to properly operate a large water-infrastructure project. The tunnels fit within a long history of diverting water from the natural environment, turning once lush areas to dust, while sending that water to dry lands for profit. All of this has been happening in California since before LA tapped the Owens Valley, the story that inspired the film CHINATOWN. What started with idle curiosity about a sunken boat in the Bay has led to a sprawling and hopefully nuanced tale of water wars and the environment, the culmination of countless hours of research and interviews across the state of California. I am grateful to my amazing team: producers Kurt and Sam, cinematographer Ben, composer Jonny, sound designer Jan, animator Sherif, and narrator, DeLanna. We hope that River’s End convinces you of the precarious balance of the environment at the mercy of predominantly agricultural water usage. It is only this knowledge and understanding that will allow us to change and adapt, and prevent the destruction of California’s ecosystems, as well as ecosystems throughout the world. If we can solve California’s water problems, we can solve the world’s. Learn where your water comes from—it’s a public resource and it belongs to you. – Jacob Morrison

About the filmmaker – Jacob Morrison – Writer / Director /Producer is a filmmaker releasing his feature directorial debut, River’s End. Morrison has produced series for VICELAND and Fullscreen, wrote and starred in a multi-episode explainer series for Vice, and directed a half-hour television pilot. He is a graduate of USC’s School of Cinematic Arts and a native of Southern California.

“This complex overview may bring in a lot of new-ish factors, like climate change and species extinctions… but some things remain the same, notably corrupt relationships between California politicians and industry lobbies.” – Dennis Harvey, 48 Hills

“Jacob Morrison’s documentary is his feature film debut and it is one that demonstrates his passion for the subject and thoroughness as a documentary filmmaker.” – Carey-Ann Pawsey, Orca Sound