They say you can never escape a mother’s love… but for Chloe, that’s not a comfort — it’s a 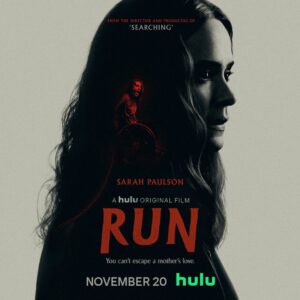 threat. Hulu’s latest high profile film project RUN opens the door on something unnatural, even sinister about the relationship between Chloe (newcomer Kiera Allen) and her mom, Diane (Sarah Paulson). Diane has raised her daughter in total isolation, controlling every move she’s made since birth, and there are secrets that Chloe’s only beginning

to grasp. From the visionary writers, producers and director of the breakout film Searching, comes a suspense thriller that shows that

when mom gets a little too close, you need to RUN. Director Aneesh Chaganty and Producer Sev Ohanian join us for a conversation on the challenges of pulling together a high wire psychological thriller and working with a promising young actor, Kiera Allen on a brilliant film anchored by one of the finest actors working today, Sarah Paulson.

“It’s also a hell of a lot of fun on a basic B-movie level, thanks to Chaganty’s expert control of tone, his superb crafting of suspense sequences, and excellent work from Paulson and Allen.” – Don Kaye, Den of Geek

“Run showcases the whiplash intensity and cold calculation of Sarah Paulson at her peak, with intense moments that will leave you breathless.” – Jack Wilhelmi, Screen Rant