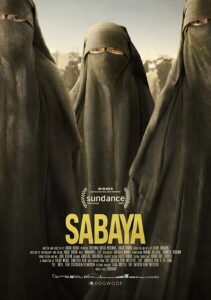 up in the Al-Hol Camp in northeastern Syria. Considered the most dangerous camp in the Middle East, it is situated amidst a volatile political and military reality where Daesh is still omnipresent. Five years ago, Daesh killed thousands of Yazidis in the Sinjar province of Iraq and abducted thousands of Yazidi women and girls to be held and sold as sex slaves – called sabaya. In SABAYA, Mahmud, Ziyad and other volunteers from the Yazidi

Home Center rescue the sabaya, who are still being held by Daesh in the camp. Continuously phoning, smoking and sometimes bickering, Mahmud and Ziyad systematically prepare their missions and know exactly who to look for, and where. Often accompanied by female infiltrators – some of them former sabaya – and armed with nothing but an old mobile phone and a

small gun, they travel to the camp in an inconspicuous van. Once there, mostly by night, they must act extremely quickly to avoid potential violence. Under the loving care of Mahmud’s wife, Siham, and his mother, Zahra, it might take a long time for the young women to heal, but perhaps one day the traumatized girls will also be strong enough to become brave female infiltrators themselves, helping to rescue even more Yazidi Sabaya from the claws of an ideology that tolerates nothing but itself. Through this observational film,  directed, shot and edited by acclaimed Swedish/Kurdish director Hogir Hirori, we

experience first-hand the strong contrast between the tense situation in the camp and the comfort of daily life at home. Director Hogir Hirori and Producer Antonio Merenda joins us for a conversation on the risks that all of the project’s participants, including Mahmud and Siyad, took on in order to tell the story of unfathomable cruelty and deadly violence aimed at the Yazidi people in general and the Yazidi women.

For more go to: sabayathefilm.com

It opens on Friday, July 30 in New York (Film Forum) and Los Angeles (Laemmle Royal and Laemmle Pasadena Playhouse), with an expansion to theaters and virtual cinemas nationwide beginning August 6.

Opens in New York and Los Angeles on Friday, July 30

In the Los Angeles area are:

About the filmmaker – Hogir Hirori was born in 1980 in Duhok, Iraqi Kurdistan. In 1999, he fled to Sweden and has lived since then in Stockholm. He works as a freelance photographer, editor and director and runs his own production company, Lolav Media. Hogir’s most recent work, The Deminer, had its world premiere at IDFA 2017, where it received the Special Jury Award for Best Documentary Feature. The film has since travelled to more than 50 international film festivals and aired on more than 30 broadcasters worldwide.

About the filmmaker – Originally from Italy, Antonio Russo Merenda moved to Stockholm in 1993 where he founded Hysteria Film, which he ran for 15 years. Antonio started his production company Ginestra Film in 2012 and served as Documentary Film Commissioner at the Swedish Film Institute between 2015-2017. Antonio’s productions have been aired on broadcasters worldwide, selected by major international film festivals and received awards such as the VPRO Award for Best Documentary Feature with Don Juan (IDFA 2015), the Special Jury Award for Best Documentary Feature for The Deminer (IDFA 2017) as well as the Golden Dove with Vodka Factory (DokLeipzig 2010) and with Colombianos (DokLeipzig 2012). With Hysteria Film, Antonio was involved in the production of Searching for Sugar Man , the 2013 Oscar winner for Best Documentary Feature.

“With “Sabaya,” we witness documentary filmmaking at its boldest; we find hope in seeing not only the triumphs of the Yazidi Home Center but also what the medium can do.” – Kimber Myers, Los Angeles Times

“A stirring depiction of heroism… The daring on display by Hirori is matched and (he’d certainly say) exceeded by the bravery of his subjects… Stunning moments of visual awe… Sabaya is a triumph of risking-your-neck, DIY filmmaking.” – Christian Blauvelt, IndieWire

“There is so much earth-shattering bravery on display in the miraculous Sabaya that you wonder how the Swedish-Kurdish director Hogir Hirori managed to pull off a documentary that avoids showy, predictable notes of brouhaha throughout.” – Tomris Laffly, RogerEbert.com