SALT IN MY SOUL is the story of a woman, Mallory Smith, wise beyond her years 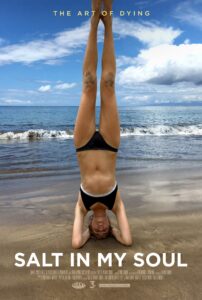 who was diagnosed with cystic fibrosis at the age of three. In her twenty five-year battle with the deadly disease, Mallory carved out a life that most of

diaries, hundreds of hours of newly  discovered footage, and audio recordings, the film offers Mallory as the narrator of her own extraordinary chronicle. Director Will Battersby and Mallory’s mom, Diane Shade Smith join us for a conversation on the honest approach that Salt in My Soul takes in telling Mallory’s story, the resolve of the young women to live beyond medical, social and personal expectations this disease imposed on her and the determined search by her dad for a identify a viable therapy to save her life.

For news and updates go to: saltinmysouldoc.com

About the filmmaker – Will Battersby (Filmmaker) has been producing documentaries and features for 15 years. His first documentary as producer,  Trumbo, won the National Board of Review Freedom of Speech award. The film, about blacklisted Hollywood screenwriter Dalton Trumbo, was released by Samuel Goldwyn Films and had its premiere at the Toronto International Film Festival. SALT IN MY SOULis Will’s second documentary as director. The first, The Canal, will be released by Showtime which is currently adapting it into a limited series. Will is producing alongside Patricia Arquette, who will also direct. The Canal  is the first feature documentary about the environmental tragedy in the Love Canal neighborhood of Niagara Falls and the extraordinary group of working-class women who fought to save their families.  Will’s narrative feature credits include: SXSW favorite The Spine of Night, a hand-drawn animated fantasy film that RLJE released in October 2021, which stars Richard E. Grant, Lucy Lawless and Patton Oswalt; Stephen King’s A Good Marriage starring Joan Allen; They Remain starring Will Jackson Harper, and The Bleeding House, the first feature from Emmy Award-winning writer/director Philip Gelatt (Love, Death & Robots). Will served as Head of Development on Alex Gibney’s Oscar-nominated documentary Enron: The Smartest Guys in the Room, and Stephen Soderbergh’s Bubble.

About the subject – Mallory Smith, who grew up in Los Angeles, was a freelance writer and editor specializing in environmental issues, social justice, and

healthcare-related communications. She graduated Phi Beta Kappa from Stanford University and worked as a senior producer at Green Grid Radio, an environmental storytelling radio show and podcast. Her radio work was featured on KCRW, National Radio Project, and State of the Human. She was a fierce advocate for those who suffered from cystic fibrosis, launching the viral social media campaign Lunges4Lungs with friends and raising over $5 million with her parents for CF research through the annual Mallory’s Garden event. She died at the age of twenty-five on November 15, 2017, two months after receiving a double-lung transplant. Mallory’s Legacy Fund has been established in her memory at the Cystic Fibrosis Foundation.

About the book – SALT IN MY SOUL: An Unfinished Life, by Mallory Smith, is a powerful, intimate, and inspiring portrait of a brave young woman living with chronic illness. Mallory understood that patient voices need to be amplified in order to improve healthcare, that the intersection of human behavior and nature is critical to environmental sustainability, and that love and friendship give life meaning. As Mallory’s body deteriorated, she sharpened her mind, crystalized her thinking, and honed her writing skills. In her 2500 pages of private journal entries, she created poetry out of prosaic experiences.  Beautifully written, provocative, and peppered with insights, SALT IN MY SOUL reminds us to follow Mallory’s mantra and “Live Happy.” For more information about the book SALT IN MY SOUL: An Unfinished Life please go to: penguinrandomhouse.com/books/salt-in-my-soul-by-mallory-smith

“Salt in My Soul” is extremely painful to watch, especially as it shows the roller coaster of Smith’s recurring hospitalizations. But it does paint a vivid portrait of who she was and what she believed.” – Ben Kenigsberg, New York Times

“Salt in My Soul strikes a graceful balance… it centers itself on her voice and viewpoint, her determination not to let her illness define her while grappling with her ambitions and mortality.” – Valerie Kalfrin, AWFJ Women on Film