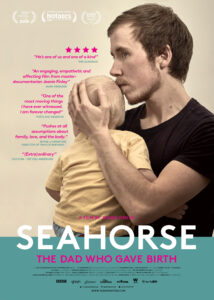 transgender man who yearns to start a family. However for Freddy this ordinary desire comes with unique challenges. Deciding to carry his own baby took years of soul searching, but nothing could prepare him for the reality of pregnancy, as both a physical experience and one that challenges society’s fundamental understanding of gender, parenthood and family. He quickly realizes that what to him feels pragmatic, to others feels deeply confusing and confronting; this was not part of his plan. Against a backdrop of increasing hostility towards trans people the world over, Freddy is forced to confront his own naivety, mine unknown depths of courage

and lean on every friend and family member who will stand by him. Made with unprecedented access and collaboration over three years, the film follows Freddy from preparing to conceive right through to birth. It is an intimate, audacious and lyrical story for the cinema about conception, pregnancy, birth and what makes us who we are. SEAHORSE is directed by acclaimed filmmaker Jeanie Finlay (Game of Thrones, The Last Watch, Orion: The Man Who Would Be King). Jeanie Finlay joins us for a conversation on one trans man’s pioneering quest to fulfil an age-old desire: to start his own family.

For news, screenings and updates go to: seahorsefilm.com

About the Director: Director / Producer / Writer Jeanie Finlay is one of Britain’s most distinctive documentary makers. She creates award-winning work for cinema and television, telling intimate stories to international audiences. She has made films for HBO, IFC, BBC as well as four commissions for the acclaimed BBC Storyville strand, including BIFA nominated The Great Hip Hop Hoax and  BIFA Award-winning Orion:The Man Who Would Be King Whether inviting audience behind the scenes of Teesside’s last record shop in her home town (SOUND IT OUT), or to share the extraordinary journey of a British transgender man, pregnant with his child (BIFA nominated Seahorse) or onto the set of the world’s biggest television show (Emmy nominated Game Of Thrones: The Last Watch), all of Jeanie’s films are all made with the same steel and heart, sharing an empathetic approach to bringing overlooked and untold stories to the screen. She set up Glimmer Films in 2008 to develop and deliver ambitious, engaging documentary works, made in the region for an international audience. Glimmer Films aim to: Creatively challenge the form of documentary. Celebrate untold, intimate stories. Further explore “wraparound filmmaking”; continuing a groundbreaking practice of engaging with audiences in innovative and meaningful ways throughout production and distribution. For more on Jeanie and her work go to: jeaniefinlay.com

★★★★ ”A tender – and rather wonderful – documentary about love, family, raging hormones and the complexities of identity.” – The Guardian

“An engaging, empathetic and affecting film from master-documentarian Jeanie Finlay” TOP 5 FILMS TO SEE IN CINEMAS THIS WEEK – Mark Kermode

★★★★ ”An astonishing, unmissable story” – Financial Times
“One of the most moving things I have ever witnessed. I am forever changed. – Portland Observer