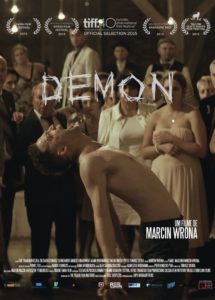 Newly arrived from England to marry his fiancée Zaneta (Agnieszk Zulewska, Chemo), Peter (Israeli actor Itay Tiran, Lebanon) has been given a gift of her family’s ramshackle country house in rural Poland.  It’s a total fixer-upper, and while inspecting the premises on the eve of the wedding, he falls into a pile of human remains.  The ceremony proceeds, but strange things begin to happen…During the wild reception, Peter begins to come undone, and a dybbuk, the iconic ancient figure from Jewish folklore, takes a toehold in this present-day celebration-for a very particular reason, as it turns out.  Based on noted Polish writer Piotr Rowicki’s play Adherence, DEMON is the final work by Marcin Wrona, who died just as DEMON was set to premiere in Poland, is part absurdist comedy, part love story-that scares, amuses, and charms in equal measure.  Acclaimed at several festivals including New Directors/New Films, the Toronto Film Festival, and Austin Fantastic Fest where it won the Award for Best Horror Feature. Producer Olga Szymanska, widow of DEMON director Marcin Wrona joins us for a conversation on this hauntingly beautiful film.

For news and updates go to: demon.film

“Wrona keeps everything creepily ambiguous right up to the end, when the foggy dawn breaks and what we have witnessed becomes like a dream within a dream.” – Peter Rainer, Christian Science Monitor

“..a unique take on the Jewish legend of the Dybbuk that feels both deeply rooted in cultural nightmares and refreshingly new…“Demon” is stylish and clever from its concept..but it’s the execution that really matters.  There’s a great energy to the piece, from the framing of the visual compositions, to the eerie atmosphere created by the lights hanging from the ceiling of what looks like a barn.  There’s fantastic costume design as well as a lead performance that engages on every level.” — Brian Tallerico, Rogerebert.com

“A darkly humorous reworking of “The Dybbuk,” with a deftly realized switch that turns that familiar tale of love from beyond the grave into a parable of Polish anti-Semitism in the post-war era….  a black comedy in the vein of “The Exterminating Angel.” — George Robinson, The Jewish Week