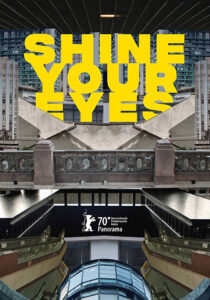 of Amadi (OC Ukeje), a musician from Lagos who travels to São Paulo to track down his missing older brother Ikenna (Chukwudi Iwuji) and bring him back home to Nigeria. Following the faint traces of Ikenna’s footsteps, he discovers that his brother was not the distinguished math professor he was supposed to be, but actually had contrived an intricate and nearly delusional series of schemes to

accumulate wealth in Brazil. As the mysteries deepen, so too does Amadi’s attraction to this vibrant newfound culture—and to his brother’s Brazilian ex-lover, Emilia (Indira Nascimento). As he closes in on his sibling’s whereabouts, Amadi is faced with choosing between his faithfulness to his family

and the possibility of a new life in São Paulo. Director, Producer and Co-screenwriter Matias Mariani joins us to talk about his brilliant, thoughtful mediation on family, culture, identity and self-discovery.

Director’s Statement: Throughout my life the question of identity has always been very important to me. As a kid I moved around a lot within Brazil and abroad, and I always wondered what part of me was I able to bring to each new city and what part I left behind. The idea to reinvent oneself, to shed one’s skin and start anew, has always been a luring fantasy, which I carried with me and that heavily motivated me to write this film. When I was 18, shortly before I started university in New York, I went to West Africa for the first time with my aunt, who used to buy handcrafted wares and fabrics there to sell back in Brazil. We travelled throughout Burkina Faso, Senegal and Mali, and since then I’ve come back every couple of years, travelling through most of the region. A few years after that, when I moved back to São Paulo I’ve noticed the growing influx of West Africans, particularly Nigerian Igbos, moving to the downtown area of the city, which has been in a state of decay for several decades at that point. Together with my partner Maíra Bühler, we started frequenting the informal HQ of the Igbos in São Paulo, the Galeria Presidente, first only for fun and then as pro-bono teachers of Portuguese for the recent arrivals. With the contacts we made there, we proceeded to travel to Nigeria (Lagos, Onitsha, Enugu, Owerri) to extend our research, and that’s how Shine Your Eyes was originally born. – Matias Mariani

“A lyrical Sao Paulo mystery-travelogue that takes us through math, music and into madness.” – Roger Moore, Movie Nation