SIMPLE AS WATER is a soft-spoken meditation on love, displacement, and 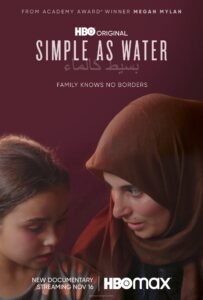 fracturing familial relations from Academy Award-winner Megan Mylan. Closely-observed portraits of Syrian families filmed across five countries reveal the impact of war, separation and displacement, SIMPLE AS WATER takes us into Syrian families’ quests for normalcy and through the whirlwind of obstacles—to building life anew. As a conflict at home forces separation and movement to unfamiliar ground, Mylan’s cinematic lens finds the powerful yet everyday acts of nurturing and kinship, traveling with her protagonists as they build a new sense of belonging. From

brotherly protection, motherly love, and the playful guidance of a sibling, these closely observed scenes show touching stories of resilience and reveal ties that bind families together in the face of adversity. Filmed in Turkey, Greece, Germany, Syria and US, Mylan’s sensitive camera amplifies the universal importance of family. Oscar®-winning director Megan Mylan (Lost Boys of Sudan, Smile Pinki.) joins us for a conversation on her extraordinarily intimate and empathetic multi-part story of four families looking for a semblance of humanity and relieve from implacable state run-institutions.

To watch go to: hbo.com/simple-as-water

For more about Megan Mylan go to: principeproductions.org

Simple As Water has been “Shortlisted” for Best Documentary Feature

About the filmmaker – Director / Producer / Editor Megan Mylan creates intimate observational films on complex global issues. She won an Academy® Award for her documentary Smile Pinki and an Independent Spirit Award for Lost Boys of Sudan which was short-listed for an Oscar® and named a New York Times Critics’ Pick. Her films have screened theatrically and on television throughout the world including HBO, PBS, ARTE, BBC, NHK, NDTV, Sundance Channel, Doordarshan and TV Brasil. She is the recipient of a Guggenheim Fellowship, and multiple Emmy® nominations. She served for several years on the Academy of Motion Picture Arts and Sciences’ Executive Committee for Documentary. Before beginning in documentary, Megan worked with Ashoka, an international development non-profit, in the U.S. and Brazil. She has a Bachelor’s from Georgetown University’s School of Foreign Service and Masters’ degrees in Journalism and Latin American Studies from UC Berkeley where she was also guest director of the Graduate Documentary program. For more about Megan Mylan go to: principeproductions.org

“Superb … A level of deep, intimate access and rapport that few filmmakers can hope to achieve … ‘Simple’ unfolds more like a riveting neorealist drama.” – INDIEWIRE

“Stirringly shot … a viewing experience that is at once intimate and expansive.” –  Michael Rechtshaffen, Los Angeles Times

“The poetic lyricism of Mylan’s film is what makes it stand out … Despite the heartrending storylines, there are also go-karts and balloons, and plenty of smiles and kisses. It’s a stunning achievement to make a film about the Syrian refugee crisis so beautiful and endlessly watchable.” – Hammer to Nail

“‘Simple as Water’ is anything but simple when it comes to its technical achievements, weaving together familiar immigrant narratives in ways that still manage to surprise and stun.” – Claire Shaffer, New York Times