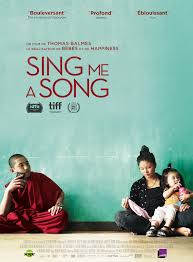 Happiness (2014) subjects, Peyangki, now a teenaged Buddhist monk living in a rural (yet Wi-Fi equipped) monastery in Bhutan, absorbed in the wonders of the world that are a simple click away. The structured daily village rituals of prayer and candle lighting now compete with the powerful lure of smartphones and TV.  Apps for chats and dating introduce the monks to girls and violent video games, neither of which quite line up with the traditional vows of the monks. Peyangki is passionate about love songs

and forms a relationship over an app, WeChat, with a young singer (Ugyen) in the “big city” of Thimphu. Distracted and disinterested in study, and often scolded by his masters and mother, he sells medicinal mushrooms to make enough money to leave the monastery and travel to Ugyen. Peyangki

trades in his robes for street clothes, but will he succumb to romance and the temptations of the city or return to his pious life in the monastery? Director Thomas Balmès (Babies, Christ Comes to Papuans, A Decent Factory) joins us to talk about his nuanced portrait of a young man’s introduction to the world, offers us an eye-opening snapshot of the effects of technology, and challenges us to reassess our perceptions of self-worth and beliefs in an age of unparalleled connectivity.

For news and updates go to: thomasbalmes.com/sing-me-a-song

About the filmmaker – Thomas Balmès directed his first film in 1996; BOSNIA HOTEL was the story of U.N. Kenyan peacekeepers in Bosnia. Thomas Balmès has been working as an independent director and producer of nonfiction films, specializing in international co-productions, since 1992. His initial projects included studies of filmmakers James Ivory and Michelangelo Antonioni. This was followed by MAHARAJAH BURGER; Mad Cows; Holy Cows, about the mad cow crisis as seen from the Indian perspective. THE GOSPEL ACCORDING TO THE PAPUANS (2000) following the conversion to Christianity of a Papuan Chief, was honored with the Silver Spire Award at the San Francisco International Film Festival. He directed a sequel in Papua the following year, WAITING FOR JESUS. A DECENT FACTORY, the story of a Nokia executive who inspects a mobile phone factory in China, was screened at more than 50 film festivals and received many honors, including a Europa Award. The film was released theatrically in the U.S. in 2005. DAMAGES, a.k.a. How Much Is Your Life Worth?, was filmed at a Connecticut law firm specializing in personal injury cases, and was co-produced by 15 countries and broadcast worldwide. Thomas initiated a series for national Japanese television : NHK, Tokyo Modern; and produced (A NORMAL LIFE – CHRONICLE OF A SUMO Wrestler), directed by Jill Coulon, which screened at Amsterdam’s 2009 International Documentary Film Festival. He is regularly invited to conduct lectures and master classes in France and abroad such as Brown University, the Watson Institute, Lisbon International Film Festival. His next film, BABIES takes a look at one year in the life of four babies from around the world, from Mongolia to Namibia to San Francisco to Tokyo. Happiness reflects the impact of the arrival of television in a small Himalayan village. Through the eyes of an eight years old monk named Peyangki, praying eagerly for a TV set, we see the last village of Bhutan going through the process of globalization. The film won the Documentary World Cinema Cinematography Award at the 2014 Sundance Film Festival. For more go to: thomasbalmes.com

“Balmès doesn’t arrive at easy, scathing conclusions about the internet. Instead, he lets the camera journey to unexpected places, leading to a different kind of meditation that strikes with deep emotional resonance…” – Kristen Yoonsoo Kim, New York Times

“Even if we see “trouble” the minute we spy that first phone, we don’t necessarily guess how this fascinating “speed of change” story will play out.” – Roger Moore, Movie Nation

“This film will not resolve the question of whether technological “progress” represents an advance or a decline in civilization, but it certainly will provoke conversations about that issue.” – Stephen Farber, Hollywood Reporter