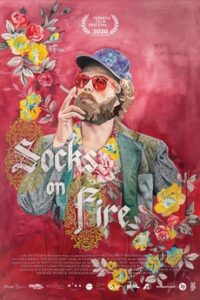 in the familial battle for his beloved grandmother’s throne. McGuire returned home from New York City to

Hokes Bluff, Alabama to find that his Aunt Sharon—his favorite childhood relative—had locked her gay, drag-queen brother, his Uncle John, out of the family home. As a queer Southerner who is both protective and skeptical of the South, this family rupture stoked a

fire within McGuire to document the place and the people he calls home. Through a series of stylized reenactments spun in with family VHS footage, SOCKS  ON FIRE documents the fluidity of identity, personality and performance in his hometown among his kin and the many women who’ve been a force in Bo’s life. Director and writer Bo McGuire joins us for a lively conversation on matriarchy, family, betrayal, homophobia and smoldering footwear.

For news and updates go to: socksonfirefilm.com

“Socks On Fire is both a tribute to the filmmaker’s beloved grandmother and a first-person saga of a clan riven by petty jealousies and old wounds, fueled by one member’s deep-seated homophobia. Blending home videos and intimate interviews with masterful reenactments—including the ingenious casting of local drag queens—McGuire paints a riveting picture of a house divided.”  Mimi Brody – Tribeca Film Festival

About Director – Bo McGuire was born the queer son of a Waffle House cook and his third-shift waitress in Hokes Bluff, Alabama. The first movie he truly fell for was the music video for Reba McEntire’s “Fancy.” He was a Ryan Murphy + Half Initiative Mentee and one of Filmmaker Magazine’s “25 New Faces of Independent Film.” His feature debut, SOCKS ON FIRE, won the jury prize for best documentary feature at the 2020 Tribeca Film Festival and premiered internationally in the Luminous section at IDFA 2020. The film was selected as part of the Cinema Eye Honors’ “Stay Focused” initiative and was nominated for an IDA award for best writing. His original television pilot, SHITBIRD, was selected by Spike Lee to receive the Sandra Ifraimova Award and his feature script, ALABAMA SNIPE FIGHT, appeared on NYU’s Purple List. He belongs to the First Church of Dolly Parton.