The directorial debut of Sam Soko, SOFTIE is an intimate 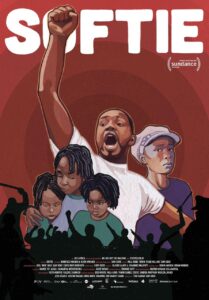 look at the life of Boniface Mwangi, a daring and audacious Kenyan photojournalist and activist who fights for Kenyan citizens to change a corrupt political system; his supportive wife Njeri stands by him and was often protesting alongside him. Now that they three small children, her priorities have shifted. Boniface on the other hand, decided to take his ideas further and run for political office. He claims he is fighting for his children and their future, but after receiving serious threats of violence, Njeri worries he is risking the safety

of their entire family.  Boniface is forced to face a difficult choice – which should come first, family or country? SOFTIE, the winner of the World Cinema Documentary Special Jury Award for Editing at the Sundance Film Festival, is now

streaming as part of Hot Docs Film Festival Online. SOFTIE will have its North American broadcast premiere on October 12 as a part of the award-winning PBS documentary series POV. Director Sam Solo joins us for a conversation on his intimate, moving portrait of Boniface “Softie” Mwangi, a man willing to sacrifice everything for his country, his wife, Njeri and his family.

For news, screenings and updates go to: softiethefilm.com

About the filmmaker – Sam Soko is a director and producer based in Nairobi. His work on sociopolitical projects in music and film has allowed him to connect and work with artists around the world. He is co-founder of LBx Africa, a Kenyan production company that produced the 2018 Academy Award–nominated short fiction film Watu Wote. The film Softie is his first feature documentary project.

About the subject – Boniface “Softie” Mwangi has long fought injustices in his country as a political activist. Now he’s taking the next step by running for office in a regional Kenyan election. From the moment Boniface decides to run, telling his wife, Njeri, in passing with a hesitant laugh, he responds to each challenge with optimism. But running a clean campaign against corrupt opponents becomes increasingly harder to combat with idealism alone. And Boniface soon finds that challenging strong political dynasties is putting his family at risk. Should country really come before family, as he’s always believed?

“Eye-opening as “Softie” is as an immediate account of toxic Kenyan politics, it’s an equally moving marriage story, unsentimental but generously sympathetic in its study of a family brought to the brink of collapse for a greater good cause.” – Guy Lodge, Variety

“Softie is a compelling act of defiance, made more alarming by the violent events documented throughout the film, including the torture and murder of an official charged with keeping the elections fair and safe.” – John Fink, The Film Stage

“Softie is a grim assessment of both the cost of revolution and modern-day manhood.” – Aramide Tinubu, Shadow and Act