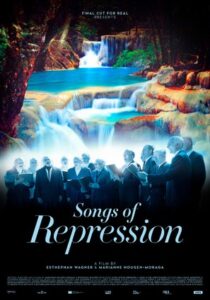 begins and ends at  the foot of the Andes Mountains in Chile in the picturesque German colony of Colonia Dignidad (Colony of Dignity). The beauty of the place belies a grim past. In 1961, a German preacher named Paul Schäfer and his congregation moved to Chile with the stated aim of helping the poor. They established Colonia Dignidad, which transformed into a closed sect where child abuse, collective beatings and slave-like living conditions were an ongoing reality for

45 years. Many in the colony assisted Pinochet’s dictatorship in torturing and killing political prisoners and burying them in mass graves on their own 40,000-acre land. In 2007, Schäfer was arrested and the colony opened up. During that process, the community changed its name to Villa Baviera (Bavarian Village), now a tourist resort where you can relax, eat German cuisine and listen to yodeling. It remains the home of several generations of perpetrators and victims of the cult, inexplicably coexisting without reckoning with decades of abuse. Co-directors Marianne Hougen-Moraga and Estephan Wagner join us to talk about their chilling exploration of the community through the experiences of its surviving members.

For news and updates go to: estephanwagner.com/songs-of-repression

About the filmmaker – Marianne Hougen-Moraga (Director) Graduated with a Master’s degree in film studies from Copenhagen University. She also holds a master in Screen Documentary from Goldsmiths College. Hougen-Moraga has directed a number of short documentaries, such as ‘Returned’ (2011), which premiered at CPH:DOX, and ‘Sea of Sorrow – Sea of Hope’ (2017), which was nominated for a Danish Robert Award for best short documen- tary. Her feature documentary debut is ‘Songs of Represvsion’ (2020), which she has directed with Estephan Wagner.

About the filmmaker – Estephan Wagner (Director and Editor). Graduated from the National Film and Television School in London. Originally trained as an editor in Germany. Wagner has been working as a documentary director for more than a decade. He directed ‘Last Dreams’ (2013) that premiered at CPH:DOX. His feature documentary ‘Les Sau- teurs’ (2016) had theatrical distribution in Germany, France, the UK and Italy, has been screened at more than 70 film festivals and has won more than 15 awards including at the Ecumenical Jury Award at the Berlinale and the Cinema Eye Spotlight award.