The feature film debut of director Darius Marder, Sound of Metal, chronicles the 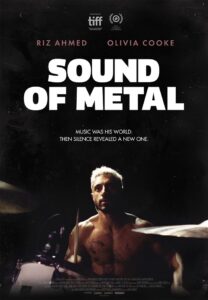 life of Ruben, (Riz Ahmed) an itinerant punk-metal drummer. During a series of adrenaline-fueled one-night gigs, Ruben begins to experience intermittent hearing loss. When a specialist tells him his condition will rapidly worsen, he thinks his music career — and with it his life — is over. His bandmate and girlfriend Lou (Olivia Cooke) checks the recovering heroin addict into a secluded sober house for the deaf in hopes it will prevent a relapse and help him learn to adapt to his new

situation. But after being welcomed into a community that accepts him just as he is, Ruben has to choose between his equilibrium and the drive to reclaim the life he once knew. Utilizing startling, innovative sound design techniques, director Darius Marder takes audiences inside Ruben’s experience to vividly recreate his journey into a rarely examined world.

Director and screenwriter Darius Marder joins us for a conversation on technical challenge of creating a cinematic language to meet the demands of telling Ruben’s complex story, creating an environment for remarkable performances from Riz Ahmed, Olivia Cooke and Paul Raci and his collaboration with fellow director Derek Cianfrance (The Place Beyond the Pines).

To watch go to: amazon.com/Sound of Metal

About the filmmaker – DARIUS MARDER (Director, Writer) is a writer and director making his narrative feature directorial debut. His film Loot was awarded the Best Documentary Feature prize at the 2008 Los Angeles Film Festival, received five Cinema Eye Honors Award nominations and earned Marder an Independent Spirit Award nomination in the Truer Than Fiction category. Marder then co-wrote The Place Beyond the Pines with Derek Cianfrance and Ben Coccio. The original screenplay won the trio a PEN Literary Award in 2014. The following year Marder and Cianfrance co-adapted S.C. Gwynne’s Pulitzer Prize finalist Empire of the Summer Moon for Warner Bros. The film will go into production in 2021 with Cianfrance directing.

“As Ruben’s fear and rage begins to open itself to the unknown, the movie reaches toward something profound – finding real, furious power in the spaces between the sound.” – Leah Greenblatt, Entertainment Weekly

“An engrossing deeply affecting, meticulously crafted movie. The tone is straightforward and naturalistic. The camera focuses on intimate connections between the characters. This is a thoughtful, grounded, human scale film.” – Karen Gordon, Original Cin

“The film is profound, frightening, uplifting and, yes, actually breathtaking at times, and you’re not likely to take your hearing for granted anytime soon afterward.” – Brian Truitt, USA Today

“It’s a devastating, poignant, and ultimately hopeful film, especially for a side of humanity that rarely sees itself portrayed on screen.” – David Fontana, Film Inquiry

With ‘Sound of Metal,’ filmmaker Darius Marder crafts one of the most compelling, raw, and unforgettable films of the year.” – Preston Barta, Denton Record-Chronicle