Albert Speer is an enigma. The highest-ranking Nazi in Nuremberg to be spared 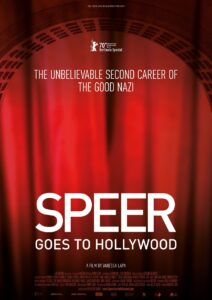 the death sentence, Speer was one of Hitler’s closest confidants and his chief architect, tasked with rebuilding Berlin as the capital of a global empire. As Reichsminister of Munitions, Speer was responsible for 12 million slave laborers. And yet, even now, he has the reputation of being “the good Nazi” – a myth he carefully constructed himself. SPEER GOES TO HOLLYWOOD meets its protagonist in 1971, while Speer was working on a screenplay for Paramount Pictures, based on his bestselling wartime memoir “Inside the Third Reich”. Based on months of audio cassettes, recorded by

screenwriter Andrew Birkin, it features Speer’s callous attempt to whitewash his past in a feature film. The audio narrative is supplemented by rare archival footage, taken before and during World War II and later, during Speer’s retirement as a semi-reclusive country gentleman. Director Vanessa Lapa’s SPEER GOES TO HOLLYWOOD is a fitting follow up to her award-winning documentary on the life of the leader of the detested SS titled THE DECENT ONE (2014). Her latest film is a cautionary tale about Albert Speer’s 1971 attempt to whitewash his past with a Hollywood adaptation of his bestselling wartime memoir, “Inside the Third Reich”. Director Vanessa Lapa joins us for a conversation on the concerted attempt to rehabilitate the reputation and re-write the culpability of a trusted and faithful confidante of Adolf Hitler.

For news, updates and screenings go to: speergoestohollywood.com

The film will open at the Film Forum in New York on October 29, and at Laemmle Royal and Laemmle Town Center in Los Angeles on November 5th. Other cities will follow.

About the filmmaker – Although she was born and raised in Belgium, Vanessa Lapa has been living and working in Israel since 1995. A talented polyglot and accomplished journalist, she produced and directed over one hundred news reports and documentaries for Israeli television. She was deeply involved on the Israeli side of content and production for New York Times columnist Thomas Friedman’s riveting 52-minute documentary Straddling the Fence (USA, 2003), which was aired worldwide. In 2006, Vanessa founded Realworks, Ltd., an independent production house, based in Tel Aviv, which specializes in documentary film. Olmert: Concealed Documentary (Israel, 2009), one of the company’s earliest projects, was hailed as a uniquely insightful achievement in cinéma verité. The film featured behind-the-scenes revelations about the private and public life of Israeli Prime Minister Ehud Olmert. At the time, Vanessa was already hard at work on The Decent One, an intimate look at SS Reichsführer Heinrich Himmler, the most powerful person in the Third Reich after Adolf Hitler. Having discovered that Himmler assiduously kept a diary throughout most of his life, Vanessa’s film offered an unprecedented and often surprising glimpse into the mind of this nefarious butcher. Vanessa researched, wrote, directed, and produced this remarkable document about this infamous but little-known man. Eight years in the making, The Decent One had its world premiere at the Berlin Film Festival in 2014. It was an official selection for Panorama, which features the festival’s edgiest, most daring work. The Decent One went on to win the Best Documentary Feature award at the Jerusalem Film Festival. All in all, it was an official selection in over 100 film festivals worldwide. It had a theatrical release in 50 countries and was broadcast in 60. Vanessa followed this film with Speer Goes to Hollywood, a feature documentary about another Nazi official, Reichsminister for Armaments Albert Speer, told in his own words. The film has been officially selected for the Berlinale Special, and will have its world premiere at the Berlin Film Festival in February 2020.

“Speer’s spurious position no longer goes unchallenged, nor does his wartime command over 12 million slave laborers go unacknowledged, and Lapa’s documentary lays bare the falsities in his preferred narrative in a dense, sober and compelling fashion” – Sarah Ward, Screen International