Suzanne (Suzanne Lindon) is sixteen. She is bored with people her own 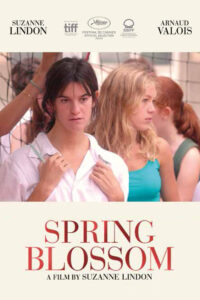 age. From the outside, everything appears lovely in her charmed world, but the everyday monotony of school and her relationships with friends and family feels completely uninspired. Every day on her way to high school, she passes a theater. There, she meets a 35-year-old actor named Raphaël (Arnaud Valois, BPM (Beats Per Minute). Despite their age difference they find in each other an answer to their ennui and develop a strong connection. Immersed in the world of grown-ups and adult choices, Suzanne begins questioning the pitfalls of

blossoming too quickly and missing out on life – the life of a 16-year-old, which she had struggled so much to enjoy in the same way as her peers. SPRING BLOSSOM is a masterful and refreshing tale, filled with freewheeling musical numbers, of young teen’s sense of curiosity and wonderment at first-love. Director, writer and lead actor Suzanne Lindon joins us for a conversation on the personal story behind the story of SPRING BLOSSOM, the passion and confidence that propelled this project from diary to distribution and what was going through her mind on the first day the 19 year-old Suzanne step on to the set to direct her debut feature film.

For news, screenings and updates go to: kimstim.com/film/spring-blossom

KimStim Films is proud to present the US theatrical release of SPRING BLOSSOM, a film written, directed, and starring Suzanne Lindon. SPRING BLOSSOM is Suzanne Lindon’s directorial debut at nineteen, based on the screenplay she wrote at fifteen. The film will open at Angelika Film Center in New York and at Laemmle Theaters in Los Angeles, and in other cities, on May 21, 2021.

About the filmmaker – Suzanne Lindon is 20 years old and was born IN April 2000 in Paris. At 15, she enrolled at the prestigious French high school Henri IV, and at the same time began writing SPRING BLOSSOM. Suzanne graduated high school with honors in 2018, and decided to take a one year preparatory course in sketching before joining l’Ecole Nationale Supérieure des Arts Décoratifs of Paris. It’s in 2019, the summer of her 19th birthday, that she decided to dive into preparation for her first feature film as both director and lead actress.

“Still just twenty when she directed and starred in the film, Lindon creates a portrait of first love which is fresh, honest and engaging.” – Wendy Ide, Screen International

“It’s an extremely accomplished introduction from its young director-star, with Lindon delivering a beguiling take on first love that casually casts off the weight of judgement.” – Emma Simmonds, The List

“Spring Blossom is a light, frothy and charming drama from writer/director Suzanne Lindon, who shows great potential in becoming a formidable director in the future. Recommended.” – Harris Dang, The AU Review