Starting at Zero (Reimagining Education in America) explores the power of 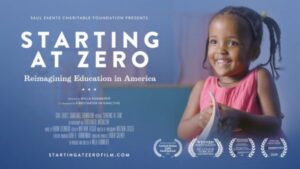 investing in high-quality early childhood education so that all children and families have the opportunity to attain the American Dream. The film brings together the voices of policymakers, educators, academics, business leaders, pediatricians, parents, and children. Starting at Zero features five current and past governors who are champions of early childhood education: Governors Steve Bullock of Montana, Kay Ivey of Alabama, and Ralph Northam of Virginia, as well as former Governors Jim Hunt of North Carolina, and Phil

Bryant of Mississippi. Starting at Zero examines the latest developmental brain science to demonstrate how essential the earliest years of learning are to maximize human potential. Key features of high-quality early childhood learning environments and experiences are outlined and then brought to life as the film delves into the evolution of Alabama’s #1 nationally ranked state Pre-K program. Director Willa Kammerer joins us to talk about the increasing awareness of early childhood education, why is it so critical to our nation’s current and future success and the long-term societal benefits of a maximizing human potential

About the filmmakers – Willa Kammerer, Director & Co-Producer is a documentary director and producer based in Providence, RI, and runs the creative agency Firestarter Interactive. Willa is committed to using film and storytelling to improve the wellbeing of people and the planet, and has deep experience working with education institutions, nonprofits, and foundations to bring this vision to life. Willa began her career as an intern in public radio, studied radio storytelling at the Salt Institute for Documentary Studies, and holds a B.A. in Italian from Middlebury College, as well as professional certificates from Georgetown University in Social Impact Storytelling and Social Impact Partnership Design. She is also a graduate of Goldman Sachs 10,000 Small Businesses. Starting at Zerois her first feature-length documentary.