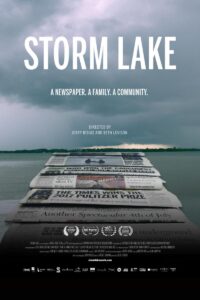 over the cornfields of Storm Lake, Iowa, which has seen its fair share of change in the 40 years since Big Agriculture came to town. Farmers blow their life savings on new equipment they hope will keep their livelihoods intact. Migrant workers flock here—welcome and not—for their slice of the American Dream. The

people of Storm Lake confront a changing and precarious existence. Enter: Art Cullen and his family members who deliver local news and editorials on a shoestring budget for their 3,000

readers. This paper means a fighting chance for their beloved hometown, and by hook or by crook, they’ll make the most of it. There’s simply too much at stake. Co-directors Jerry Risius and Betty Levison and Storm Lake Times Editor-in-Chief Art Cullen join us for a conversation on the decline of local news, quantifiably and qualitatively, why it matters and why Art Cullen and his family’s business are the lynch-pin of a functioning democracy.

For news, screenings and updates go to: stormlakemovie.com

About the filmmaker – Jerry Risius, Director, Director of Photography – With over 25 years experience as DP on such projects as The Kingmaker (Toronto Int’l Film Festival 2019),  Generation Wealth (Sundance 2018), Seeing Allred (Sundance 2018/Netflix), Brave New Voices (HBO 2009), The Devil Came on Horseback (Sundance 2007), and more recently, as a Field Producer/DP on Anthony Bourdain: No Reservations and Parts Unknown series, Brooklyn-based Jerry Risius grew up on a hog farm about an hour from Storm Lake and brings a depth of filmmaking experience along with a local perspective that very few can. Jrisius.com.

About the filmmaker – Beth Levison is an Emmy- and Peabody-winning producer/director based in NYC. Her most recent producing efforts include Women in Blue (Tribeca  Film Festival 2020/Independent Lens) and Emmy-nominated Made in Boise (AFI DOCS 2019/Independent Lens). Previous producing credits include 32 Pills: My Sister’s Suicide (HBO 2017), Emmy-nominated  Personal Statement (PBS 2018), and her independent directorial / producing debut, Lemon  (PBS 2011). Beth is the founder of Hazel Pictures, a co-founder of the Documentary Producers Alliance (DPA), producing faculty with the School of Visual Arts (SVA), and a member of AMPAS. Hazelpictures.com

“STORM LAKE is an elegiac heartland portrait…colored by the hope of endurance, both for the newspaper and the community it represents.”” – The Hollywood Reporter

“Jerry Risius and Beth Levison’s warm and biting profile of the editorial team that puts out The Storm Lake Times stirs up hope that small local newspapers, and journalism itself, can survive.” – The Boston Globe

“Beth Levison and Jerry Risius’s profound documentary is simultaneously a love letter to and a eulogy for local news—even more than that, it’s a sincere inquiry into the meaning of community and the role played by the dissemination of information in holding together further distabled societal connections. I laughed out loud at times and tearfully celebrated and mourned this endangered medium.” – Chicago Reader

“STORM LAKE reminds us that we cannot be complacent. We cannot take democracy for granted. And local reporting is a mainstay of an informed citizenry and therefore democracy.” – Des Moines Register