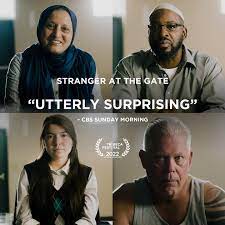 of U.S. Marine Richard Mac McKinney after returning home to Indiana, after 25 years of service, filled with an all-consuming rage toward the people he had been fighting against. Still fueled by his desire to fight for his country, he plans to bomb the local mosque. But when he comes face to face with the community of

Afghan refugees and others of Muslim faith that he seeks to kill, his plan takes an unexpected turn. Director Joshua Seftel (Lost and Found, This American Life) joins us for a conversation on his pursuit of the people who opened their hearts to a man determined to carry out a heinous act, and came to find out that sharing their common humanity would prove to be the greatest gift that they could give to one another.

For news and screenings go to: strangeratthegate.com

About the filmmaker – STRANGER AT THE GATE is the latest film in Joshua Seftel’s Emmy and Peabody-nominated SECRET LIFE OF MUSLIMS (SXSW) project, using filmmaking to combat Islamophobia. Seftel, who faced anti-Semitism as a child, has been committed to working on this subject matter for the past seven years. At age 22, Seftel made his first film, the Emmy-nominated LOST AND FOUND (PBS) which exposed the conditions of Romania’s orphaned and abandoned children and spurred the American adoption of thousands of children. His other award-winning films include TAKING ON THE KENNEDYS (POV), ENNIS’ GIFT (HBO), THE HOME TEAM (SXSW), THE MANY SAD FATES OF MR. TOLEDANO (NYT Op-Docs, Tribeca), and the anti-war movie WAR, INC. (Tribeca) starring John Cusack, Marisa Tomei, and Ben Kingsley. He is also a contributor to the Peabody Award-winning THIS AMERICAN LIFE and a commentator on CBS Sunday Morning, where he regularly interviews his 85-year-old mother.