STRAWBERRY MANSION takes us to 2035, where our dreams are no longer our 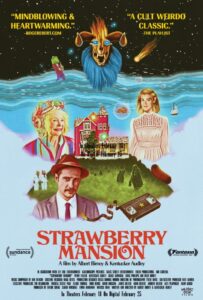 a run-down house in the countryside for a routine audit and encounters Bella Isadora (Penny Fuller), a lifelong dreamer who remains resolutely analog, circumventing the surveillance state with VHS tapes and homemade  headgear. As Preble works his way through Bella’s archive of the unconscious, he begins to fall in love with visions of her younger self (Grace Glowicki). But all is not well in dreamland as dangerous family secrets and

a rogue’s gallery of blue demons and fried chicken pitchmen

threaten to set the lovers’ paradise ablaze. Can Preble and Bella  escape from the modern, monetized dreamscape and find refuge in Strawberry Mansion? Co-directors and co-screenwriters Kentucker Audley and Albert Birney join us to talk about their fantastical and fantastically inventive and heartfelt film that is Pee-Wee’s Playhouse by way of Charlie Kaufman, and a splash of Harold and Maude whimsy.

Updates and screenings go to: strawberrymansionmovie.com

See it in a theatre: strawberrymansionmovie.com/tickets

About the filmmaker – Kentucker Audley is a filmmaker and actor who received rave reviews from the New Yorker, Hollywood Reporter, and Indiewire for his lead performance in Amy Seimetz’s directorial debut Sun Don’t Shine. He has a supporting role in David Lowery’s Ain’t Them Bodies Saints opposite Casey Affleck and Rooney Mara, which premiered at the Sundance film festival. He starred in the Sundance hit V/H/S and Dustin Guy Defa’s Bad Fever which premiered at SXSW. Audley wrote and directed the features Open Five and Open Five 2. LA Weekly says he’s “maybe the most fascinating actor in current American penny-budgeted cinema.” Also, he runs NoBudge, a blog that showcases true independent films. It’s been called “innovative” (Filmmaker Magazine) and “indispensable” (GreenCine).

About the filmmaker – Albert Birney is a Baltimore based filmmaker. He has directed four feature films, The Beast Pageant (co-directed with Jon Moses), Sylvio and Strawberry Mansion (both co-directed with Kentucker Audley) and Tux and Fanny. Sylvio was named one of the ten-best films of 2017 by The New Yorker. His films have premiered at Sundance, SXSW, the Maryland Film Festival, Slamdance and the Ottawa International Animation Festival. He recently finished making a Tux and Fanny video game with Gabriel Koenig. He is currently animating part two of Tux and Fanny.

“A film to admire not just for its psychedelic aesthetic delirium, but also for its pure moxie, its gleeful embrace of the very idea of filmmaking itself.” – Alexandra Heller-Nicholas, Film International

“Relies on a wide array of movie techniques and deploys them in conspicuously hands-on ways to create a wild science-fiction world that satirizes grim trends of modern life while tapping into a haunted realm of frustrations and desires.” – Richard Brody, New Yorker

““Strawberry Mansion” is one of the most unique American independent films to open its doors in recent memory. Only time will tell if it can attain the cult status that its charming idiosyncrasy most definitely merits.” – Carlos Aguilar, Los Angeles Times

“The filmmakers do a lot with little and don’t try to hide it, providing a welcome contrast to the idea that effects-driven storytelling exclusively belongs within the costly realm of Hollywood spectacles.” – Eric Kohn, indieWire