STRAY explores what it means to live as a being without status or security, 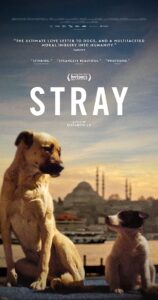 following three strays as they embark on inconspicuous journeys through Turkish 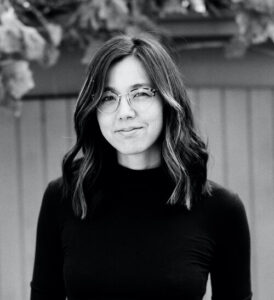 society. Zeytin, fiercely independent, embarks on  adventures through the city at night; Nazar, nurturing and protective, easily befriends the humans around her; while Kartal, a shy puppy living on the outskirts of a construction site, finds companions in the security guards who care for her. The strays’ disparate lives intersect when they each form intimate bonds with a group of young Syrians with whom they share the

streets. Director Elizabeth Lo joins us to talk about her remarkable debut documentary film, meeting Zeytin and Nazar and how she navigated the streets and the people of Istanbul to present an illuminating observation of human civilization through the unfamiliar gaze of dogs and a sensory voyage into new ways of seeing.

For news and updates go to: straymovie.com

2021 Spirit Award nomination for the Truer Than Fiction Award

Director’s Statement – The impetus for STRAY is personal. When my childhood dog died, I felt a quiet need to suppress my grief at his passing. I was shocked that something as personal as how my heart responds to the death of a loved one could be shaped by an external politics that defined him or “it” as “valueless.” As my grief evolved, I also saw how our moral conceptions of who or how much one matters can be in constant flux. This transformative moment is what propels STRAY’s exploration into value, hierarchy, and sentience. In 2017, I traveled to Turkey, a country whose history and relationship with strays is unique in the world. Turkish authorities have tried to annihilate stray dogs since 1909, leading to mass killings of Istanbul’s street dogs for the last century. But widespread protests against these killings transformed Turkey into one of the only countries where it is now illegal to euthanize or hold captive any stray dog. Every free-roaming dog today is an emblem of resistance — living manifestations of compassion in the face of intolerance. I first met Zeytin, our canine protagonist, as she hurried past me in a busy underground tunnel in Istanbul. Intrigued by her sense of purposefulness, I chased after her. She was joined by Nazar, another street dog. As it turned out, they were on the heels of a group of young men from Syria — Jamil, Halil and Ali — who were living on the streets as refugees in Turkey. Zeytin quickly emerged as the focus of our production because she was one of the rare dogs we followed who did not inadvertently end up following us back. To the very last day of shooting, she remained radically independent. In Zeytin I saw a character who could fully envelop us within her own non-human will — a quality that was vital to a story about dogs who, unlike pets, are not only defined by their relationship to humans. My journey through Turkey traversed a socio-cultural terrain in which for a moment, one nation became refuge for many others. When xenophobia, species destruction and nationalist sentiment are rising all around the world, STRAY springs from these cracks in our anthropocentric modernity. It asks us to re-evaluate what it means that our streets are continuously emptied of everyone except those whom we’ve deemed to be its legitimate citizens. Through STRAY, I hope to continually push the boundaries of the cinematic medium in order to explore and challenge unequal states of personhood — to expand viewers’ circles of moral and perceptual consideration beyond their own class, culture, and species. – Elizabeth Lo

About the filmmaker – Director, Producer, Cinematographer, Editor Elizabth Lo is an award-winning filmmaker. Her work has been broadcast and showcased internationally, including at the Sundance Film Festival, Tribeca Film Festival, Hot Docs, True/False, BAM Cinema fest, New York Times Op-Docs, and PBS POV. Elizabeth was named one of the “25 New Faces of Independent Film” by Filmmaker Magazine in 2015 and was featured in the 2015 Saatchi & Saatchi New Directors’ Showcase at Cannes Lion. She was selected for the New York Film Festival Artist Academy in 2018 and the Locarno Film Festival Filmmakers Academy in 2019. Elizabeth’s work has played at over 100 film festivals and has won numerous awards. Her short films include Hotel 22 (2015), Bisonhead (2016), Mother’s Day (2017), The Disclosure President (2016), Notes from Buena Vista (2016), Treasure Island (2014), and Last Stop in Santa Rosa (2013). In 2017, her collected shorts were released by Video Project as a DVD, The Short Films of Elizabeth Lo, for distribution to educational institutions and libraries around the world. Elizabeth was born and raised in Hong Kong and holds a B.F.A. from NYU Tisch School of the Arts and an M.F.A. from Stanford University. STRAY is her feature film debut.

“Dog lovers will drool over this profound canine love letter from Turkey.  Gorgeous, absorbing…The dogs run most of the show, and they serve as remarkable centerpieces in a complex visual tapestry.”- Eric Kohn, IndieWire

“A howling success. Artful, intimate… ‘Stray’ shines a piercing light on what it means to be an outcast in a teeming metropolis.”- Sheri Linden, The Hollywood Reporter

“As simple as its title and as complex as the city it briefly illuminates…” – Jeannette Catsoulis, New York Times